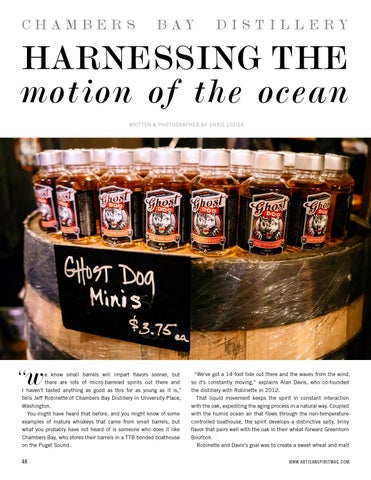 e know small barrels will impart flavors sooner, but there are lots of micro-barreled spirits out there and I haven&#39;t tasted anything as good as this for as young as it is,” tells Jeff Robinette of Chambers Bay Distillery in University Place, Washington. You might have heard that before, and you might know of some examples of mature whiskeys that came from small barrels, but what you probably have not heard of is someone who does it like Chambers Bay, who stores their barrels in a TTB bonded boathouse on the Puget Sound.

“We&#39;ve got a 14-foot tide out there and the waves from the wind, so it&#39;s constantly moving,” explains Alan Davis, who co-founded the distillery with Robinette in 2012. That liquid movement keeps the spirit in constant interaction with the oak, expediting the aging process in a natural way. Coupled with the humid ocean air that flows through the non-temperaturecontrolled boathouse, the spirit develops a distinctive salty, briny flavor that pairs well with the oak in their wheat-forward Greenhorn Bourbon. Robinette and Davis’s goal was to create a sweet wheat and malt WWW.ARTISANSPIRITMAG.COM