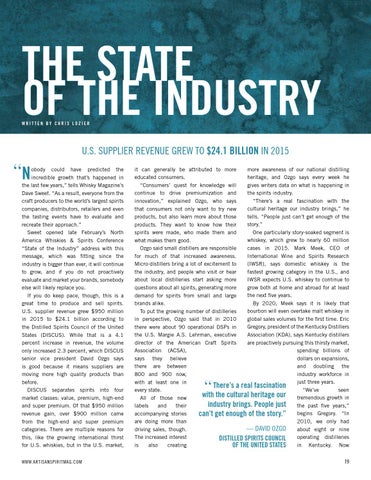 THE STATE OF THE INDUSTRY WRITTEN BY CHRIS LOZIER

obody could have predicted the incredible growth that’s happened in the last few years,” tells Whisky Magazine’s Dave Sweet. “As a result, everyone from the craft producers to the world’s largest spirits companies, distributors, retailers and even the tasting events have to evaluate and recreate their approach.” Sweet opened late February’s North America Whiskies &amp; Spirits Conference “State of the Industry” address with this message, which was fitting since the industry is bigger than ever, it will continue to grow, and if you do not proactively evaluate and market your brands, somebody else will likely replace you. If you do keep pace, though, this is a great time to produce and sell spirits. U.S. supplier revenue grew $950 million in 2015 to $24.1 billion according to the Distilled Spirits Council of the United States (DISCUS). While that is a 4.1 percent increase in revenue, the volume only increased 2.3 percent, which DISCUS senior vice president David Ozgo says is good because it means suppliers are moving more high quality products than before. DISCUS separates spirits into four market classes: value, premium, high-end and super premium. Of that $950 million revenue gain, over $900 million came from the high-end and super premium categories. There are multiple reasons for this, like the growing international thirst for U.S. whiskies, but in the U.S. market,

more awareness of our national distilling it can generally be attributed to more heritage, and Ozgo says every week he educated consumers. gives writers data on what is happening in “Consumers’ quest for knowledge will the spirits industry. continue to drive premiumization and “There’s a real fascination with the innovation,” explained Ozgo, who says cultural heritage our industry brings,” he that consumers not only want to try new tells. “People just can’t get enough of the products, but also learn more about those story.” products. They want to know how their One particularly story-soaked segment is spirits were made, who made them and whiskey, which grew to nearly 60 million what makes them good. cases in 2015. Mark Meek, CEO of Ozgo said small distillers are responsible International Wine and Spirits Research for much of that increased awareness. (IWSR), says domestic whiskey is the Micro-distillers bring a lot of excitement to fastest growing category in the U.S., and the industry, and people who visit or hear IWSR expects U.S. whiskey to continue to about local distilleries start asking more grow both at home and abroad for at least questions about all spirits, generating more the next five years. demand for spirits from small and large By 2020, Meek says it is likely that brands alike. bourbon will even overtake malt whiskey in To put the growing number of distilleries global sales volumes for the first time. Eric in perspective, Ozgo said that in 2010 Gregory, president of the Kentucky Distillers there were about 90 operational DSPs in Association (KDA), says Kentucky distillers the U.S. Margie A.S. Lehrman, executive are proactively pursuing this thirsty market, director of the American Craft Spirits spending billions of Association (ACSA), dollars on expansions, says they believe and doubling the there are between industry workforce in 800 and 900 now, just three years. with at least one in There’s a real fascination “We’ve seen every state. with the cultural heritage our tremendous growth in All of those new industry brings. People just the past five years,” labels and their accompanying stories can’t get enough of the story.” begins Gregory. “In 2010, we only had are doing more than — DAVID OZGO about eight or nine driving sales, though. operating distilleries The increased interest DISTILLED SPIRITS COUNCIL in Kentucky. Now is also creating OF THE UNITED STATES