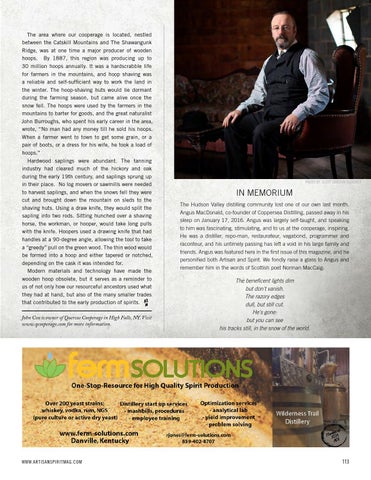 The area where our cooperage is located, nestled between the Catskill Mountains and The Shawangunk Ridge, was at one time a major producer of wooden hoops. By 1887, this region was producing up to 30 million hoops annually. It was a hardscrabble life for farmers in the mountains, and hoop shaving was a reliable and self-sufficient way to work the land in the winter. The hoop-shaving huts would lie dormant during the farming season, but came alive once the snow fell. The hoops were used by the farmers in the mountains to barter for goods, and the great naturalist John Burroughs, who spent his early career in the area, wrote, “No man had any money till he sold his hoops. When a farmer went to town to get some grain, or a pair of boots, or a dress for his wife, he took a load of hoops.” Hardwood saplings were abundant. The tanning industry had cleared much of the hickory and oak during the early 19th century, and saplings sprung up in their place. No log movers or sawmills were needed to harvest saplings, and when the snows fell they were cut and brought down the mountain on sleds to the shaving huts. Using a draw knife, they would split the sapling into two rods. Sitting hunched over a shaving horse, the workman, or hooper, would take long pulls with the knife. Hoopers used a drawing knife that had handles at a 90-degree angle, allowing the tool to take a “greedy” pull on the green wood. The thin wood would be formed into a hoop and either tapered or notched, depending on the cask it was intended for. Modern materials and technology have made the wooden hoop obsolete, but it serves as a reminder to us of not only how our resourceful ancestors used what they had at hand, but also of the many smaller trades that contributed to the early production of spirits. John Cox is owner of Quercus Cooperage in High Falls, NY. Visit www.qcooperage.com for more information.

IN MEMORIUM The Hudson Valley distilling community lost one of our own last month. Angus MacDonald, co-founder of Coppersea Distilling, passed away in his sleep on January 17, 2016. Angus was largely self-taught, and speaking to him was fascinating, stimulating, and to us at the cooperage, inspiring. He was a distiller, repo-man, restaurateur, vagabond, programmer and raconteur, and his untimely passing has left a void in his large family and friends. Angus was featured here in the first issue of this magazine, and he personified both Artisan and Spirit. We fondly raise a glass to Angus and remember him in the words of Scottish poet Norman MacCaig:

The beneficent lights dim but don&#39;t vanish. The razory edges dull, but still cut. He&#39;s gone: but you can see his tracks still, in the snow of the world.