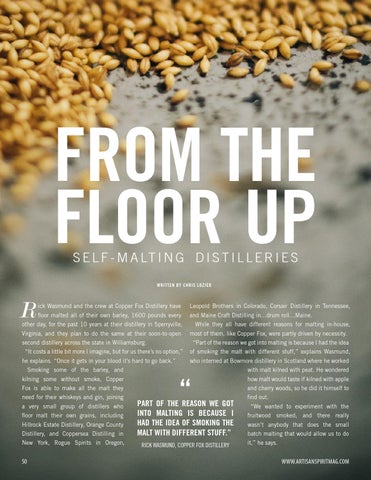 ick Wasmund and the crew at Copper Fox Distillery have

floor malted all of their own barley, 1600 pounds every

and Maine Craft Distilling in…drum roll…Maine. While they all have different reasons for malting in-house,

other day, for the past 10 years at their distillery in Sperryville,

Virginia, and they plan to do the same at their soon-to-open

most of them, like Copper Fox, were partly driven by necessity. “Part of the reason we got into malting is because I had the idea

second distillery across the state in Williamsburg. “It costs a little bit more I imagine, but for us there’s no option,” he explains. “Once it gets in your blood it’s hard to go back.” Smoking some of the barley, and kilning some without smoke, Copper Fox is able to make all the malt they need for their whiskeys and gin, joining

of smoking the malt with different stuff,” explains Wasmund, who interned at Bowmore distillery in Scotland where he worked

Distillery, and Coppersea Distilling in

PART OF THE REASON WE GOT INTO MALTING IS BECAUSE I HAD THE IDEA OF SMOKING THE MALT WITH DIFFERENT STUFF.”

a very small group of distillers who floor malt their own grains, including Hillrock Estate Distillery, Orange County

with malt kilned with peat. He wondered how malt would taste if kilned with apple and cherry woods, so he did it himself to find out. “We wanted to experiment with the fruitwood smoked, and there really wasn’t anybody that does the small batch malting that would allow us to do it,” he says.