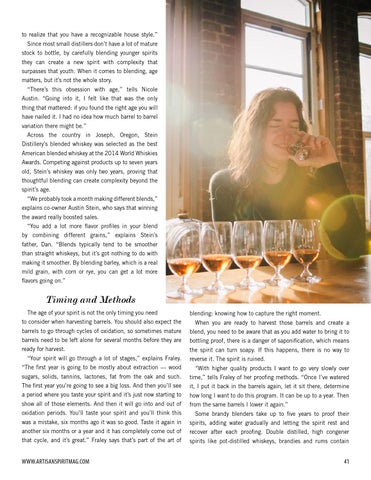 to realize that you have a recognizable house style.” Since most small distillers don’t have a lot of mature stock to bottle, by carefully blending younger spirits they can create a new spirit with complexity that surpasses that youth. When it comes to blending, age matters, but it’s not the whole story. “There’s this obsession with age,” tells Nicole Austin. “Going into it, I felt like that was the only thing that mattered: if you found the right age you will have nailed it. I had no idea how much barrel to barrel variation there might be.” Across the country in Joseph, Oregon, Stein Distillery’s blended whiskey was selected as the best American blended whiskey at the 2014 World Whiskies Awards. Competing against products up to seven years old, Stein’s whiskey was only two years, proving that thoughtful blending can create complexity beyond the spirit’s age. “We probably took a month making different blends,” explains co-owner Austin Stein, who says that winning the award really boosted sales. “You add a lot more flavor profiles in your blend by combining different grains,” explains Stein’s father, Dan. “Blends typically tend to be smoother than straight whiskeys, but it’s got nothing to do with making it smoother. By blending barley, which is a real mild grain, with corn or rye, you can get a lot more flavors going on.”

blending: knowing how to capture the right moment.

to consider when harvesting barrels. You should also expect the

When you are ready to harvest those barrels and create a

barrels to go through cycles of oxidation, so sometimes mature

blend, you need to be aware that as you add water to bring it to

bottling proof, there is a danger of saponification, which means

the spirit can turn soapy. If this happens, there is no way to

“Your spirit will go through a lot of stages,” explains Fraley.

reverse it. The spirit is ruined.

“The first year is going to be mostly about extraction — wood

“With higher quality products I want to go very slowly over

sugars, solids, tannins, lactones, fat from the oak and such.

time,” tells Fraley of her proofing methods. “Once I’ve watered

The first year you’re going to see a big loss. And then you’ll see

it, I put it back in the barrels again, let it sit there, determine

how long I want to do this program. It can be up to a year. Then

show all of those elements. And then it will go into and out of

from the same barrels I lower it again.”

oxidation periods. You’ll taste your spirit and you’ll think this

Some brandy blenders take up to five years to proof their

was a mistake, six months ago it was so good. Taste it again in

spirits, adding water gradually and letting the spirit rest and

that cycle, and it’s great.” Fraley says that’s part of the art of