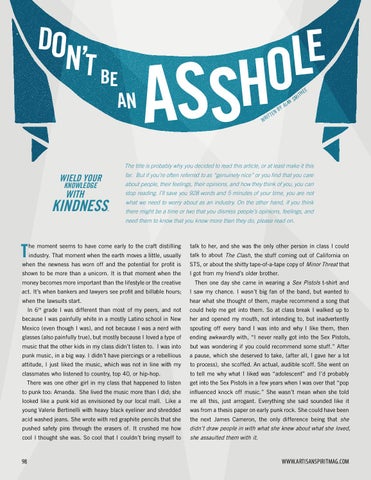 The title is probably why you decided to read this article, or at least make it this

far. But if you’re often referred to as “genuinely nice” or you find that you care about people, their feelings, their opinions, and how they think of you, you can stop reading. I’ll save you 928 words and 5 minutes of your time, you are not what we need to worry about as an industry. On the other hand, if you think there might be a time or two that you dismiss people’s opinions, feelings, and need them to know that you know more than they do, please read on.

he moment seems to have come early to the craft distilling

talk to her, and she was the only other person in class I could

industry. That moment when the earth moves a little, usually

talk to about The Clash, the stuff coming out of California on

STS, or about the shitty tape-of-a-tape copy of Minor Threat that

shown to be more than a unicorn. It is that moment when the

I got from my friend’s older brother.

money becomes more important than the lifestyle or the creative

I saw my chance. I wasn’t big fan of the band, but wanted to

when the lawsuits start.

hear what she thought of them, maybe recommend a song that

In 6 grade I was different than most of my peers, and not

could help me get into them. So at class break I walked up to

her and opened my mouth, not intending to, but inadvertently

Mexico (even though I was), and not because I was a nerd with

spouting off every band I was into and why I like them, then

glasses (also painfully true), but mostly because I loved a type of

ending awkwardly with, “I never really got into the Sex Pistols,

music that the other kids in my class didn’t listen to. I was into

but was wondering if you could recommend some stuff.” After

punk music, in a big way. I didn’t have piercings or a rebellious

a pause, which she deserved to take, (after all, I gave her a lot

attitude, I just liked the music, which was not in line with my

to process), she scoffed. An actual, audible scoff. She went on

classmates who listened to country, top 40, or hip-hop.

to punk too: Amanda. She lived the music more than I did; she

influenced knock off music.” She wasn’t mean when she told

me all this, just arrogant. Everything she said sounded like it

was from a thesis paper on early punk rock. She could have been

acid washed jeans. She wrote with red graphite pencils that she

the next James Cameron, the only difference being that she

pushed safety pins through the erasers of. It crushed me how

didn’t draw people in with what she knew about what she loved,

cool I thought she was. So cool that I couldn’t bring myself to

she assaulted them with it.