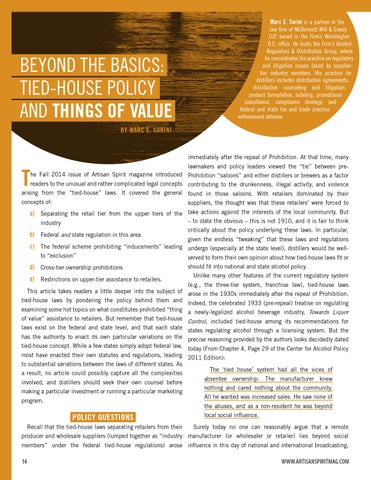 BEYOND THE BASICS: TIED-HOUSE POLICY AND THINGS OF VALUE

Marc E. Sorini is a partner in the law firm of McDermott Will &amp; Emery LLP, based in the Firm’s Washington D.C. office. He leads the Firm’s Alcohol Regulatory &amp; Distribution Group, where he concentrates his practice on regulatory and litigation issues faced by suppliertier industry members. His practice for distillers includes distribution agreements, distribution counseling and litigation, product formulation, labeling, promotional compliance, compliance strategy, and federal and state tax and trade practice enforcement defense.

immediately after the repeal of Prohibition. At that time, many lawmakers and policy leaders viewed the “tie” between prehe Fall 2014 issue of Artisan Spirit magazine introduced Prohibition “saloons” and either distillers or brewers as a factor readers to the unusual and rather complicated legal concepts contributing to the drunkenness, illegal activity, and violence

arising from the “tied-house” laws. It covered the general found in those saloons. With retailers dominated by their concepts of: suppliers, the thought was that these retailers’ were forced to

a) Separating the retail tier from the upper tiers of the take actions against the interests of the local community. But – to state the obvious – this is not 1910, and it is fair to think

b) Federal and state regulation in this area

critically about the policy underlying these laws. In particular, given the endless “tweaking” that these laws and regulations

served to form their own opinion about how tied-house laws fit or should fit into national and state alcohol policy. Unlike many other features of the current regulatory system

(e.g., the three-tier system, franchise law), tied-house laws This article takes readers a little deeper into the subject of arose in the 1930s immediately after the repeal of Prohibition. tied-house laws by pondering the policy behind them and Indeed, the celebrated 1933 (pre-repeal) treatise on regulating examining some hot topics on what constitutes prohibited “thing a newly-legalized alcohol beverage industry, Towards Liquor of value” assistance to retailers. But remember that tied-house Control, included tied-house among its recommendations for laws exist on the federal and state level, and that each state states regulating alcohol through a licensing system. But the has the authority to enact its own particular variations on the precise reasoning provided by the authors looks decidedly dated tied-house concept. While a few states simply adopt federal law, today (From Chapter 4, Page 29 of the Center for Alcohol Policy most have enacted their own statutes and regulations, leading 2011 Edition): to substantial variations between the laws of different states. As The ‘tied house’ system had all the vices of a result, no article could possibly capture all the complexities absentee ownership. The manufacturer knew involved, and distillers should seek their own counsel before nothing and cared nothing about the community. making a particular investment or running a particular marketing All he wanted was increased sales. He saw none of program. the abuses, and as a non-resident he was beyond

local social influence. Surely today no one can reasonably argue that a remote

producer and wholesale suppliers (lumped together as “industry manufacturer (or wholesaler or retailer) lies beyond social members” under the federal tied-house regulations) arose influence in this day of national and international broadcasting,