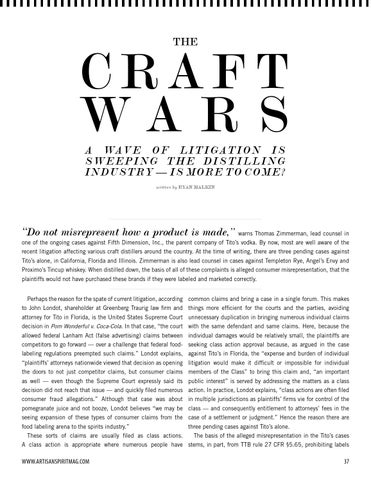 “Do not misrepresent how a product is made,”

one of the ongoing cases against Fifth Dimension, Inc., the parent company of Tito’s vodka. By now, most are well aware of the recent litigation affecting various craft distillers around the country. At the time of writing, there are three pending cases against Tito’s alone, in California, Florida and Illinois. Zimmerman is also lead counsel in cases against Templeton Rye, Angel’s Envy and Proximo’s Tincup whiskey. When distilled down, the basis of all of these complaints is alleged consumer misrepresentation, that the plaintiffs would not have purchased these brands if they were labeled and marketed correctly. Perhaps the reason for the spate of current litigation, according common claims and bring a case in a single forum. This makes to John Londot, shareholder at Greenberg Traurig law firm and things more efficient for the courts and the parties, avoiding attorney for Tito in Florida, is the United States Supreme Court unnecessary duplication in bringing numerous individual claims decision in Pom Wonderful v. Coca-Cola. In that case, “the court with the same defendant and same claims. Here, because the allowed federal Lanham Act (false advertising) claims between individual damages would be relatively small, the plaintiffs are competitors to go forward — over a challenge that federal food- seeking class action approval because, as argued in the case labeling regulations preempted such claims.” Londot explains, against Tito’s in Florida, the “expense and burden of individual “plaintiffs’ attorneys nationwide viewed that decision as opening litigation would make it difficult or impossible for individual the doors to not just competitor claims, but consumer claims members of the Class” to bring this claim and, “an important as well — even though the Supreme Court expressly said its public interest” is served by addressing the matters as a class decision did not reach that issue — and quickly filed numerous action. In practice, Londot explains, “class actions are often filed consumer fraud allegations.” Although that case was about in multiple jurisdictions as plaintiffs’ firms vie for control of the pomegranate juice and not booze, Londot believes “we may be class — and consequently entitlement to attorneys’ fees in the seeing expansion of these types of consumer claims from the case of a settlement or judgment.” Hence the reason there are food labeling arena to the spirits industry.” These sorts of claims are usually filed as class actions.

three pending cases against Tito’s alone. The basis of the alleged misrepresentation in the Tito’s cases

A class action is appropriate where numerous people have stems, in part, from TTB rule 27 CFR §5.65, prohibiting labels