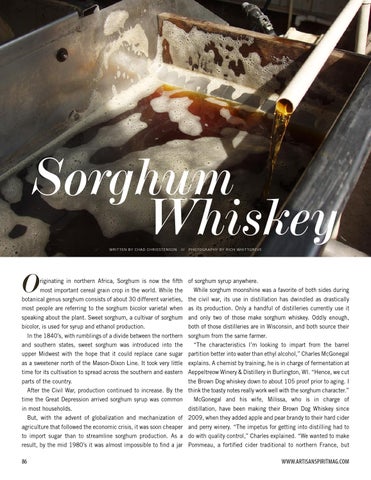 riginating in northern Africa, Sorghum is now the fifth of sorghum syrup anywhere. most important cereal grain crop in the world. While the

While sorghum moonshine was a favorite of both sides during

botanical genus sorghum consists of about 30 different varieties, the civil war, its use in distillation has dwindled as drastically most people are referring to the sorghum bicolor varietal when as its production. Only a handful of distilleries currently use it speaking about the plant. Sweet sorghum, a cultivar of sorghum and only two of those make sorghum whiskey. Oddly enough, bicolor, is used for syrup and ethanol production.

both of those distilleries are in Wisconsin, and both source their

In the 1840’s, with rumblings of a divide between the northern sorghum from the same farmer. and southern states, sweet sorghum was introduced into the

“The characteristics I’m looking to impart from the barrel

upper Midwest with the hope that it could replace cane sugar partition better into water than ethyl alcohol,” Charles McGonegal as a sweetener north of the Mason-Dixon Line. It took very little explains. A chemist by training, he is in charge of fermentation at time for its cultivation to spread across the southern and eastern Aeppeltreow Winery & Distillery in Burlington, WI. “Hence, we cut parts of the country.

the Brown Dog whiskey down to about 105 proof prior to aging. I

After the Civil War, production continued to increase. By the think the toasty notes really work well with the sorghum character.” time the Great Depression arrived sorghum syrup was common in most households.

McGonegal and his wife, Milissa, who is in charge of distillation, have been making their Brown Dog Whiskey since

But, with the advent of globalization and mechanization of 2009, when they added apple and pear brandy to their hard cider agriculture that followed the economic crisis, it was soon cheaper and perry winery. “The impetus for getting into distilling had to to import sugar than to streamline sorghum production. As a do with quality control,” Charles explained. “We wanted to make result, by the mid 1980’s it was almost impossible to find a jar Pommeau, a fortified cider traditional to northern France, but