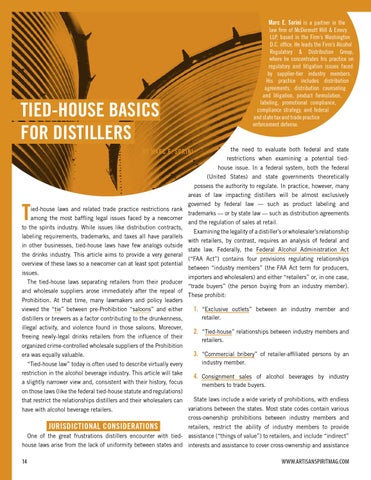 the need to evaluate both federal and state

restrictions when examining a potential tiedhouse issue. In a federal system, both the federal (United States) and state governments theoretically possess the authority to regulate. In practice, however, many

areas of law impacting distillers will be almost exclusively

to the spirits industry. While issues like distribution contracts, labeling requirements, trademarks, and taxes all have parallels in other businesses, tied-house laws have few analogs outside the drinks industry. This article aims to provide a very general overview of these laws so a newcomer can at least spot potential issues. The tied-house laws separating retailers from their producer and wholesale suppliers arose immediately after the repeal of Prohibition. At that time, many lawmakers and policy leaders viewed the “tie” between pre-Prohibition “saloons” and either distillers or brewers as a factor contributing to the drunkenness, illegal activity, and violence found in those saloons. Moreover, freeing newly-legal drinks retailers from the influence of their organized crime-controlled wholesale suppliers of the Prohibition era was equally valuable. “Tied-house law” today is often used to describe virtually every restriction in the alcohol beverage industry. This article will take a slightly narrower view and, consistent with their history, focus on those laws (like the federal tied-house statute and regulations) that restrict the relationships distillers and their wholesalers can have with alcohol beverage retailers.

governed by federal law — such as product labeling and trademarks — or by state law — such as distribution agreements and the regulation of sales at retail. Examining the legality of a distiller’s or wholesaler’s relationship with retailers, by contrast, requires an analysis of federal and state law. Federally, the Federal Alcohol Administration Act (“FAA Act”) contains four provisions regulating relationships between “industry members” (the FAA Act term for producers, importers and wholesalers) and either “retailers” or, in one case, “trade buyers” (the person buying from an industry member). These prohibit:

1. “Exclusive outlets” between an industry member and retailer.

3. “Commercial bribery” of retailer-affiliated persons by an industry member.

One of the great frustrations distillers encounter with tied- assistance (“things of value”) to retailers, and include “indirect” house laws arise from the lack of uniformity between states and interests and assistance to cover cross-ownership and assistance