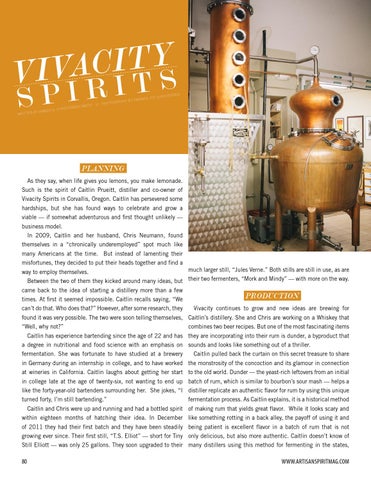 PLANNING As they say, when life gives you lemons, you make lemonade. Such is the spirit of Caitlin Prueitt, distiller and co-owner of Vivacity Spirits in Corvallis, Oregon. Caitlin has persevered some hardships, but she has found ways to celebrate and grow a viable — if somewhat adventurous and first thought unlikely — business model. In 2009, Caitlin and her husband, Chris Neumann, found themselves in a “chronically underemployed” spot much like many Americans at the time. But instead of lamenting their misfortunes, they decided to put their heads together and find a way to employ themselves.

much larger still, “Jules Verne.” Both stills are still in use, as are

Between the two of them they kicked around many ideas, but their two fermenters, “Mork and Mindy” — with more on the way. came back to the idea of starting a distillery more than a few times. At first it seemed impossible. Caitlin recalls saying, “We

can’t do that. Who does that?” However, after some research, they

Vivacity continues to grow and new ideas are brewing for

found it was very possible. The two were soon telling themselves, Caitlin’s distillery. She and Chris are working on a Whiskey that “Well, why not?”

combines two beer recipes. But one of the most fascinating items

Caitlin has experience bartending since the age of 22 and has they are incorporating into their rum is dunder, a byproduct that a degree in nutritional and food science with an emphasis on sounds and looks like something out of a thriller. fermentation. She was fortunate to have studied at a brewery

Caitlin pulled back the curtain on this secret treasure to share

in Germany during an internship in college, and to have worked the monstrosity of the concoction and its glamour in connection at wineries in California. Caitlin laughs about getting her start to the old world. Dunder — the yeast-rich leftovers from an initial in college late at the age of twenty-six, not wanting to end up batch of rum, which is similar to bourbon’s sour mash — helps a like the forty-year-old bartenders surrounding her. She jokes, “I distiller replicate an authentic flavor for rum by using this unique turned forty, I’m still bartending.”

fermentation process. As Caitlin explains, it is a historical method

Caitlin and Chris were up and running and had a bottled spirit of making rum that yields great flavor. While it looks scary and within eighteen months of hatching their idea. In December like something rotting in a back alley, the payoff of using it and of 2011 they had their first batch and they have been steadily being patient is excellent flavor in a batch of rum that is not growing ever since. Their first still, “T.S. Elliot” — short for Tiny only delicious, but also more authentic. Caitlin doesn’t know of Still Elliott — was only 25 gallons. They soon upgraded to their many distillers using this method for fermenting in the states,