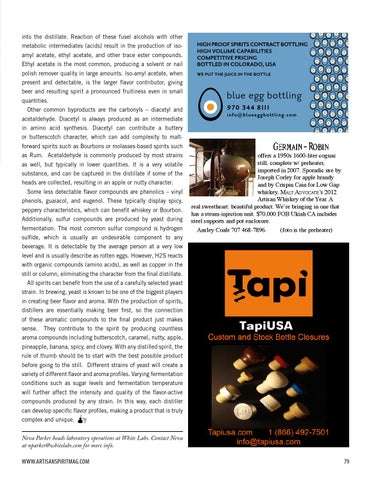 bottled in colorado, usa into the distillate. Reaction of these fusel alcohols with other

Ethyl acetate is the most common, producing a solvent or nail

WE pUt thE JUiCE iN thE BottLE

present and detectable, is the larger flavor contributor, giving beer and resulting spirit a pronounced fruitiness even in small

Other common byproducts are the carbonyls – diacetyl and

acetaldehyde. Diacetyl is always produced as an intermediate in amino acid synthesis. Diacetyl can contribute a buttery or butterscotch character, which can add complexity to maltforward spirits such as Bourbons or molasses-based spirits such BLUE-EGG-AD.indd 1

as Rum. Acetaldehyde is commonly produced by most strains as well, but typically in lower quantities. It is a very volatile substance, and can be captured in the distillate if some of the heads are collected, resulting in an apple or nutty character. Some less detectable flavor compounds are phenolics – vinyl phenols, guaiacol, and eugenol. These typically display spicy, peppery characteristics, which can benefit whiskey or Bourbon. Additionally, sulfur compounds are produced by yeast during fermentation. The most common sulfur compound is hydrogen sulfide, which is usually an undesirable component to any

offers a 1950s 1600-liter cognac still, complete w/ preheater, imported in 2007. Sporadic use by Joseph Corley for apple brandy and by Crispin Cain for Low Gap whiskey, Malt advocate’s 2012 Artisan Whiskey of the Year. A real sweetheart: beautiful product. We’re bringing in one that has a steam-injection unit. $70,000 FOB Ukiah CA includes steel supports and pot enclosure. Ansley Coale 707 468-7896. (foto is the preheater)

beverage. It is detectable by the average person at a very low level and is usually describe as rotten eggs. However, H2S reacts with organic compounds (amino acids), as well as copper in the still or column, eliminating the character from the final distillate. All spirits can benefit from the use of a carefully selected yeast strain. In brewing, yeast is known to be one of the biggest players in creating beer flavor and aroma. With the production of spirits, distillers are essentially making beer first, so the connection of these aromatic compounds to the final product just makes sense.

They contribute to the spirit by producing countless

aroma compounds including butterscotch, caramel, nutty, apple, pineapple, banana, spicy, and clovey. With any distilled spirit, the rule of thumb should be to start with the best possible product before going to the still. Different strains of yeast will create a variety of different flavor and aroma profiles. Varying fermentation conditions such as sugar levels and fermentation temperature will further affect the intensity and quality of the flavor-active compounds produced by any strain. In this way, each distiller can develop specific flavor profiles, making a product that is truly complex and unique.