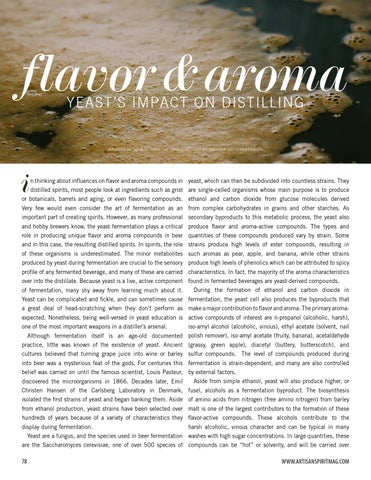 n thinking about influences on flavor and aroma compounds in yeast, which can then be subdivided into countless strains. They distilled spirits, most people look at ingredients such as grist are single-celled organisms whose main purpose is to produce

or botanicals, barrels and aging, or even flavoring compounds. ethanol and carbon dioxide from glucose molecules derived Very few would even consider the art of fermentation as an from complex carbohydrates in grains and other starches. As important part of creating spirits. However, as many professional secondary byproducts to this metabolic process, the yeast also and hobby brewers know, the yeast fermentation plays a critical produce flavor and aroma-active compounds. The types and role in producing unique flavor and aroma compounds in beer quantities of these compounds produced vary by strain. Some and in this case, the resulting distilled spirits. In spirits, the role strains produce high levels of ester compounds, resulting in of these organisms is underestimated. The minor metabolites such aromas as pear, apple, and banana, while other strains produced by yeast during fermentation are crucial to the sensory produce high levels of phenolics which can be attributed to spicy profile of any fermented beverage, and many of these are carried characteristics. In fact, the majority of the aroma characteristics over into the distillate. Because yeast is a live, active component found in fermented beverages are yeast-derived compounds. of fermentation, many shy away from learning much about it.

During the formation of ethanol and carbon dioxide in

Yeast can be complicated and fickle, and can sometimes cause fermentation, the yeast cell also produces the byproducts that a great deal of head-scratching when they don’t perform as make a major contribution to flavor and aroma. The primary aromaexpected. Nonetheless, being well-versed in yeast education is active compounds of interest are n-propanol (alcoholic, harsh), one of the most important weapons in a distiller’s arsenal.

Although fermentation itself is an age-old documented polish remover), iso-amyl acetate (fruity, banana), acetaldehyde practice, little was known of the existence of yeast. Ancient (grassy, green apple), diacetyl (buttery, butterscotch), and cultures believed that turning grape juice into wine or barley sulfur compounds. The level of compounds produced during into beer was a mysterious feat of the gods. For centuries this fermentation is strain-dependent, and many are also controlled belief was carried on until the famous scientist, Louis Pasteur, by external factors. discovered the microorganisms in 1866. Decades later, Emil

Aside from simple ethanol, yeast will also produce higher, or

Christen Hansen of the Carlsberg Laboratory in Denmark, fusel, alcohols as a fermentation byproduct. The biosynthesis isolated the first strains of yeast and began banking them. Aside of amino acids from nitrogen (free amino nitrogen) from barley from ethanol production, yeast strains have been selected over malt is one of the largest contributors to the formation of these hundreds of years because of a variety of characteristics they flavor-active compounds. These alcohols contribute to the display during fermentation.

harsh alcoholic, vinous character and can be typical in many

Yeast are a fungus, and the species used in beer fermentation washes with high sugar concentrations. In large quantities, these are the Saccharomyces cerevisiae, one of over 500 species of compounds can be “hot” or solventy, and will be carried over