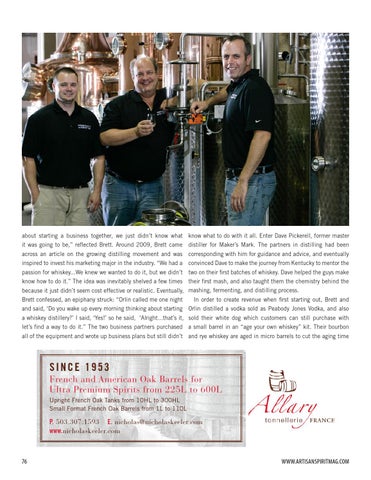 about starting a business together, we just didn’t know what know what to do with it all. Enter Dave Pickerell, former master it was going to be,” reflected Brett. Around 2009, Brett came

distiller for Maker’s Mark. The partners in distilling had been

across an article on the growing distilling movement and was

corresponding with him for guidance and advice, and eventually

inspired to invest his marketing major in the industry. “We had a

convinced Dave to make the journey from Kentucky to mentor the

passion for whiskey...We knew we wanted to do it, but we didn’t

two on their first batches of whiskey. Dave helped the guys make

know how to do it.” The idea was inevitably shelved a few times

their first mash, and also taught them the chemistry behind the

In order to create revenue when first starting out, Brett and

and said, ‘Do you wake up every morning thinking about starting

a whiskey distillery?’ I said, ‘Yes!’ so he said, ‘Alright...that’s it, sold their white dog which customers can still purchase with let’s find a way to do it.” The two business partners purchased

a small barrel in an “age your own whiskey” kit. Their bourbon