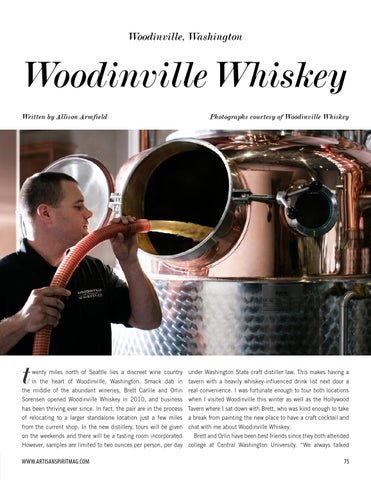 under Washington State craft distiller law. This makes having a

in the heart of Woodinville, Washington. Smack dab in

tavern with a heavily whiskey-influenced drink list next door a

the middle of the abundant wineries, Brett Carlile and Orlin

real convenience. I was fortunate enough to tour both locations

when I visited Woodinville this winter as well as the Hollywood

has been thriving ever since. In fact, the pair are in the process Tavern where I sat down with Brett, who was kind enough to take of relocating to a larger standalone location just a few miles

from the current shop. In the new distillery, tours will be given

chat with me about Woodinville Whiskey.

on the weekends and there will be a tasting room incorporated.

Brett and Orlin have been best friends since they both attended

However, samples are limited to two ounces per person, per day