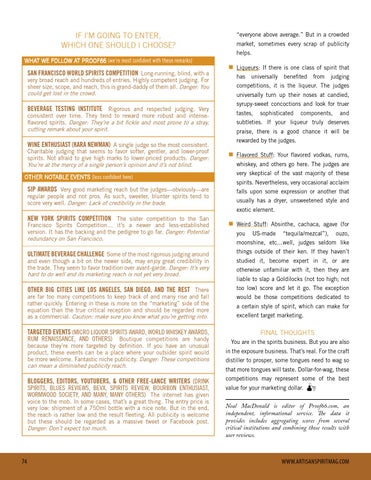 IF I’M GOING TO ENTER, WHICH ONE SHOULD I CHOOSE? WHAT WE FOLLOW AT PROOF66 (we’re most confident with these remarks)

very broad reach and hundreds of entries. Highly competent judging. For sheer size, scope, and reach, this is grand-daddy of them all. Danger: You could get lost in the crowd.

consistent over time. They tend to reward more robust and intenseflavored spirits. Danger: They’re a bit fickle and most prone to a stray, cutting remark about your spirit.

WINE ENTHUSIAST (KARA NEWMAN) A single judge so the most consistent.

Charitable judging that seems to favor softer, gentler, and lower-proof spirits. Not afraid to give high marks to lower-priced products. Danger: You’re at the mercy of a single person’s opinion and it’s not blind. OTHER NOTABLE EVENTS (less confident here)

regular people and not pros. As such, sweeter, blunter spirits tend to score very well. Danger: Lack of credibility in the trade.

NEW YORK SPIRITS COMPETITION The sister competition to the San

“everyone above average.” But in a crowded market, sometimes every scrap of publicity helps.

   Liqueurs: If there is one class of spirit that has

competitions, it is the liqueur. The judges universally turn up their noses at candied, syrupy-sweet concoctions and look for truer tastes,

subtleties. If your liqueur truly deserves praise, there is a good chance it will be rewarded by the judges.

   Flavored Stuff: Your flavored vodkas, rums, whiskey, and others go here. The judges are very skeptical of the vast majority of these spirits. Nevertheless, very occasional acclaim falls upon some expression or another that usually has a dryer, unsweetened style and exotic element.

Francisco Spirits Competition… it’s a newer and less-established version. It has the backing and the pedigree to go far. Danger: Potential redundancy on San Francisco.

ULTIMATE BEVERAGE CHALLENGE Some of the most rigorous judging around

things outside of their ken. If they haven’t

and even though a bit on the newer side, may enjoy great credibility in the trade. They seem to favor tradition over avant-garde. Danger: It’s very hard to do well and its marketing reach is not yet very broad.

studied it, become expert in it, or are

OTHER BIG CITIES LIKE LOS ANGELES, SAN DIEGO, AND THE REST There

too low) score and let it go. The exception

are far too many competitions to keep track of and many rise and fall rather quickly. Entering in these is more on the “marketing” side of the equation than the true critical reception and should be regarded more as a commercial. Caution: make sure you know what you’re getting into.

because they’re more targeted by definition. If you have an unusual product, these events can be a place where your outsider spirit would be more welcome. Fantastic niche publicity. Danger: These competitions can mean a diminished publicity reach.

BLOGGERS, EDITORS, YOUTUBERS, &amp; OTHER FREE-LANCE WRITERS (DRINK SPIRITS, BLUES REVIEWS, BEVX, SPIRITS REVIEW, BOURBON ENTHUSIAST, WORMWOOD SOCIETY, AND MANY, MANY OTHERS) The internet has given

voice to the mob. In some cases, that’s a great thing. The entry price is very low: shipment of a 750ml bottle with a nice note. But in the end, the reach is rather low and the result fleeting. All publicity is welcome but these should be regarded as a massive tweet or Facebook post. Danger: Don’t expect too much.

otherwise unfamiliar with it, then they are liable to slap a Goldilocks (not too high; not would be those competitions dedicated to a certain style of spirit, which can make for excellent target marketing.

FINAL THOUGHTS You are in the spirits business. But you are also in the exposure business. That’s real. For the craft distiller to prosper, some tongues need to wag so that more tongues will taste. Dollar-for-wag, these competitions may represent some of the best value for your marketing dollar.

Neal MacDonald is editor of Proof66.com, an independent, informational service. The data it provides includes aggregating scores from several critical institutions and combining those results with user reviews.