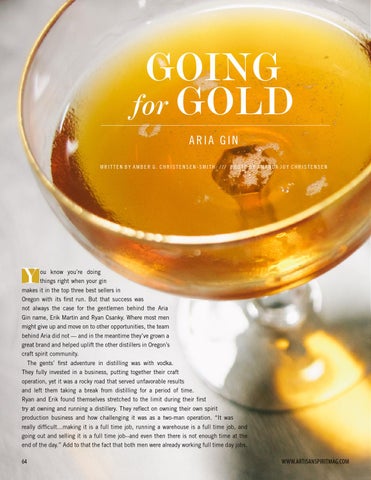 makes it in the top three best sellers in Oregon with its first run. But that success was not always the case for the gentlemen behind the Aria Gin name, Erik Martin and Ryan Csanky. Where most men might give up and move on to other opportunities, the team behind Aria did not — and in the meantime they’ve grown a great brand and helped uplift the other distillers in Oregon’s craft spirit community. The gents’ first adventure in distilling was with vodka. They fully invested in a business, putting together their craft operation, yet it was a rocky road that served unfavorable results and left them taking a break from distilling for a period of time. Ryan and Erik found themselves stretched to the limit during their first try at owning and running a distillery. They reflect on owning their own spirit production business and how challenging it was as a two-man operation. “It was really difficult…making it is a full time job, running a warehouse is a full time job, and going out and selling it is a full time job--and even then there is not enough time at the end of the day.” Add to that the fact that both men were already working full time day jobs.