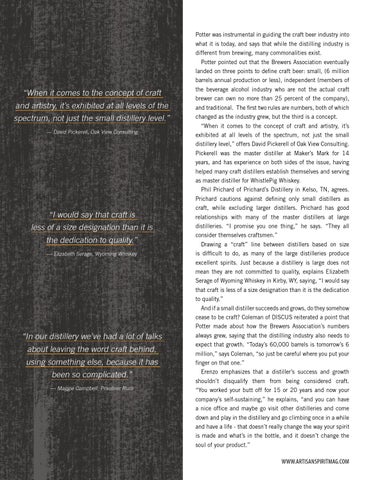 Potter was instrumental in guiding the craft beer industry into what it is today, and says that while the distilling industry is different from brewing, many commonalities exist. Potter pointed out that the Brewers Association eventually landed on three points to define craft beer: small, (6 million barrels annual production or less), independent (members of

“When it comes to the concept of craft and artistry, it’s exhibited at all levels of the spectrum, not just the small distillery level.” — David Pickerell, Oak View Consulting

the beverage alcohol industry who are not the actual craft brewer can own no more than 25 percent of the company), and traditional. The first two rules are numbers, both of which changed as the industry grew, but the third is a concept. “When it comes to the concept of craft and artistry, it’s exhibited at all levels of the spectrum, not just the small distillery level,” offers David Pickerell of Oak View Consulting. Pickerell was the master distiller at Maker’s Mark for 14 years, and has experience on both sides of the issue, having helped many craft distillers establish themselves and serving as master distiller for WhistlePig Whiskey. Phil Prichard of Prichard’s Distillery in Kelso, TN, agrees. Prichard cautions against defining only small distillers as

“I would say that craft is less of a size designation than it is the dedication to quality.” — Elizabeth Serage, Wyoming Whiskey

craft, while excluding larger distillers. Prichard has good relationships with many of the master distillers at large distilleries. “I promise you one thing,” he says. “They all consider themselves craftsmen.” Drawing a “craft” line between distillers based on size is difficult to do, as many of the large distilleries produce excellent spirits. Just because a distillery is large does not mean they are not committed to quality, explains Elizabeth Serage of Wyoming Whiskey in Kirby, WY, saying, “I would say that craft is less of a size designation than it is the dedication to quality.” And if a small distiller succeeds and grows, do they somehow cease to be craft? Coleman of DISCUS reiterated a point that Potter made about how the Brewers Association’s numbers

“In our distillery we’ve had a lot of talks about leaving the word craft behind, using something else, because it has been so complicated.”

always grew, saying that the distilling industry also needs to

expect that growth. “Today’s 60,000 barrels is tomorrow’s 6 million,” says Coleman, “so just be careful where you put your finger on that one.” Erenzo emphasizes that a distiller’s success and growth shouldn’t disqualify them from being considered craft. company’s self-sustaining,” he explains, “and you can have a nice office and maybe go visit other distilleries and come down and play in the distillery and go climbing once in a while and have a life - that doesn’t really change the way your spirit is made and what’s in the bottle, and it doesn’t change the soul of your product.”