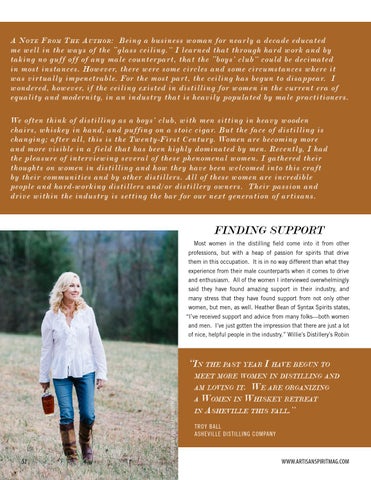 A N o t e F r o m T h e A u t h o r : Being a business woman for nearly a decade educated me well in the ways of the “glass ceiling.” I learned that through hard work and by taking no guff off of any male counterpart, that the “boys’ club” could be decimated in most instances. However, there were some circles and some circumstances where it was virtually impenetrable. For the most part, the ceiling has begun to disappear. I wondered, however, if the ceiling existed in distilling for women in the current era of equality and modernity, in an industry that is heavily populated by male practitioners. We often think of distilling as a boys’ club, with men sitting in heavy wooden chairs, whiskey in hand, and puffing on a stoic cigar. But the face of distilling is changing; after all, this is the Twenty-First Century. Women are becoming more and more visible in a field that has been highly dominated by men. Recently, I had the pleasure of interviewing several of these phenomenal women. I gathered their thoughts on women in distilling and how they have been welcomed into this craft by their communities and by other distillers. All of these women are incredible people and hard-working distillers and/or distillery owners. Their passion and drive within the industry is setting the bar for our next generation of artisans.

FINDING SUPPORT Most women in the distilling field come into it from other professions, but with a heap of passion for spirits that drive them in this occupation. It is in no way different than what they experience from their male counterparts when it comes to drive and enthusiasm. All of the women I interviewed overwhelmingly said they have found amazing support in their industry, and many stress that they have found support from not only other women, but men, as well. Heather Bean of Syntax Spirits states, “I’ve received support and advice from many folks—both women and men. I’ve just gotten the impression that there are just a lot of nice, helpful people in the industry.” Willie’s Distillery’s Robin

We are organizing a Women in Whiskey retreat in Asheville this fall.” TROY BALL ASHEVILLE DISTILLING COMPANY