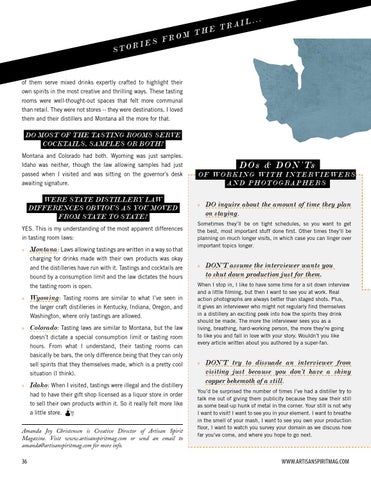 of them serve mixed drinks expertly crafted to highlight their own spirits in the most creative and thrilling ways. These tasting rooms were well-thought-out spaces that felt more communal than retail. They were not stores -- they were destinations. I loved them and their distillers and Montana all the more for that.

DO MOST OF THE TASTING ROOMS SERVE COCKTAILS, SAMPLES OR BOTH? Montana and Colorado had both. Wyoming was just samples.

Idaho was neither, though the law allowing samples had just passed when I visited and was sitting on the governor’s desk awaiting signature.

WERE STATE DISTILLERY LAW DIFFERENCES OBVIOUS AS YOU MOVED FROM STATE TO STATE? YES. This is my understanding of the most apparent differences in tasting room laws: »»

Montana: Laws allowing tastings are written in a way so that charging for drinks made with their own products was okay and the distilleries have run with it. Tastings and cocktails are

Sometimes they’ll be on tight schedules, so you want to get the best, most important stuff done first. Other times they’ll be planning on much longer visits, in which case you can linger over important topics longer.

bound by a consumption limit and the law dictates the hours the tasting room is open. »»

Tasting rooms are similar to what I’ve seen in

the larger craft distilleries in Kentucky, Indiana, Oregon, and Washington, where only tastings are allowed. »»

Colorado: Tasting laws are similar to Montana, but the law doesn’t dictate a special consumption limit or tasting room hours. From what I understand, their tasting rooms can

Idaho: When I visited, tastings were illegal and the distillery had to have their gift shop licensed as a liquor store in order to sell their own products within it. So it really felt more like a little store.

DON’T assume the interviewer wants you to shut down production just for them.

When I stop in, I like to have some time for a sit down interview and a little filming, but then I want to see you at work. Real action photographs are always better than staged shots. Plus, it gives an interviewer who might not regularly find themselves in a distillery an exciting peek into how the spirits they drink should be made. The more the interviewer sees you as a living, breathing, hard-working person, the more they’re going to like you and fall in love with your story. Wouldn’t you like every article written about you authored by a super-fan.

basically be bars, the only difference being that they can only sell spirits that they themselves made, which is a pretty cool

DO inquire about the amount of time they plan on staying.

DON’T try to dissuade an interviewer from visiting just because you don’t have a shiny copper behemoth of a still.

You’d be surprised the number of times I’ve had a distiller try to talk me out of giving them publicity because they saw their still as some beat-up hunk of metal in the corner. Your still is not why I want to visit! I want to see you in your element. I want to breathe in the smell of your mash, I want to see you own your production floor, I want to watch you survey your domain as we discuss how far you’ve come, and where you hope to go next.