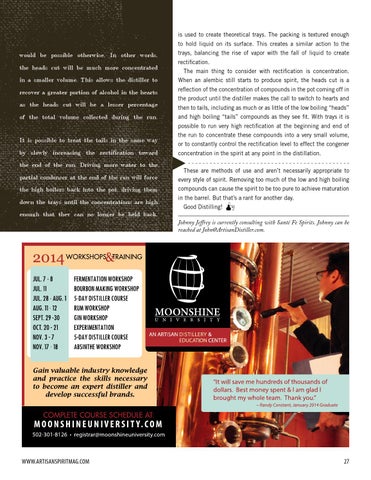 is used to create theoretical trays. The packing is textured enough to hold liquid on its surface. This creates a similar action to the

would be possible otherwise. In other words, the heads cut will be much more concentrated

trays, balancing the rise of vapor with the fall of liquid to create rectification. The main thing to consider with rectification is concentration.

in a smaller volume. This allows the distiller to

When an alembic still starts to produce spirit, the heads cut is a

recover a greater portion of alcohol in the hearts

as the heads cut will be a lesser percentage of the total volume collected during the run.

the product until the distiller makes the call to switch to hearts and then to tails, including as much or as little of the low boiling “heads” and high boiling “tails” compounds as they see fit. With trays it is possible to run very high rectification at the beginning and end of

It is possible to treat the tails in the same way by slowly increasing the rectification toward the end of the run. Driving more water to the

the run to concentrate these compounds into a very small volume, or to constantly control the rectification level to effect the congener concentration in the spirit at any point in the distillation. These are methods of use and aren’t necessarily appropriate to

partial condenser at the end of the run will force

every style of spirit. Removing too much of the low and high boiling

the high boilers back into the pot, driving them

down the trays until the concentrations are high

in the barrel. But that’s a rant for another day. Good Distilling!

enough that they can no longer be held back. Johnny Jeffrey is currently consulting with Santé Fe Spirits. Johnny can be reached at John@ArtisanDistiller.com.