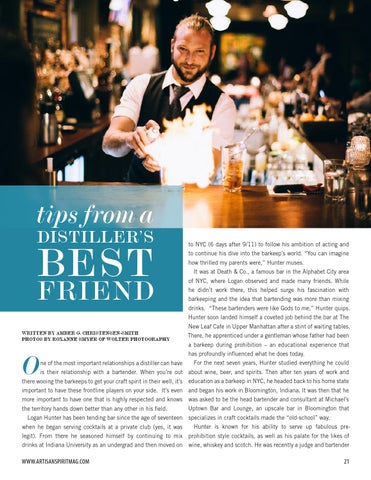 to NYC (6 days after 9/11) to follow his ambition of acting and to continue his dive into the barkeep’s world. “You can imagine how thrilled my parents were,” Hunter muses. It was at Death &amp; Co., a famous bar in the Alphabet City area of NYC, where Logan observed and made many friends. While he didn’t work there, this helped surge his fascination with barkeeping and the idea that bartending was more than mixing drinks. “These bartenders were like Gods to me,” Hunter quips. Hunter soon landed himself a coveted job behind the bar at The New Leaf Cafe in Upper Manhattan after a stint of waiting tables.

There, he apprenticed under a gentleman whose father had been

has profoundly influenced what he does today. ne of the most important relationships a distiller can have

a barkeep during prohibition – an educational experience that For the next seven years, Hunter studied everything he could

is their relationship with a bartender. When you’re out about wine, beer, and spirits. Then after ten years of work and

there wooing the barkeeps to get your craft spirit in their well, it’s

education as a barkeep in NYC, he headed back to his home state

important to have these frontline players on your side. It’s even

and began his work in Bloomington, Indiana. It was then that he

more important to have one that is highly respected and knows

the territory hands down better than any other in his field.

Uptown Bar and Lounge, an upscale bar in Bloomington that

Logan Hunter has been tending bar since the age of seventeen

specializes in craft cocktails made the “old-school” way.

when he began serving cocktails at a private club (yes, it was

Hunter is known for his ability to serve up fabulous pre-

legit). From there he seasoned himself by continuing to mix

prohibition style cocktails, as well as his palate for the likes of

drinks at Indiana University as an undergrad and then moved on

wine, whiskey and scotch. He was recently a judge and bartender