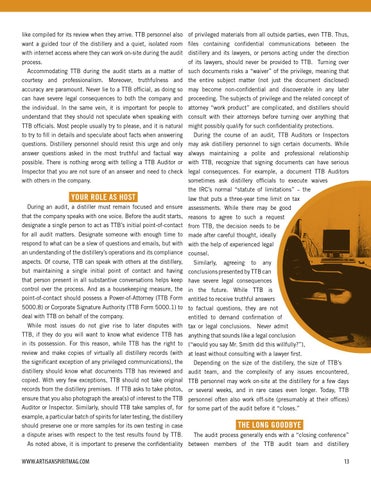 like compiled for its review when they arrive. TTB personnel also of privileged materials from all outside parties, even TTB. Thus, want a guided tour of the distillery and a quiet, isolated room files containing confidential communications between the with internet access where they can work on-site during the audit distillery and its lawyers, or persons acting under the direction process.

of its lawyers, should never be provided to TTB. Turning over

Accommodating TTB during the audit starts as a matter of such documents risks a “waiver” of the privilege, meaning that courtesy and professionalism. Moreover, truthfulness and the entire subject matter (not just the document disclosed) accuracy are paramount. Never lie to a TTB official, as doing so may become non-confidential and discoverable in any later can have severe legal consequences to both the company and proceeding. The subjects of privilege and the related concept of the individual. In the same vein, it is important for people to attorney “work product” are complicated, and distillers should understand that they should not speculate when speaking with consult with their attorneys before turning over anything that TTB officials. Most people usually try to please, and it is natural might possibly qualify for such confidentiality protections. to try to fill in details and speculate about facts when answering

During the course of an audit, TTB Auditors or Inspectors

questions. Distillery personnel should resist this urge and only may ask distillery personnel to sign certain documents. While answer questions asked in the most truthful and factual way always maintaining a polite and professional relationship possible. There is nothing wrong with telling a TTB Auditor or with TTB, recognize that signing documents can have serious Inspector that you are not sure of an answer and need to check legal consequences. For example, a document TTB Auditors with others in the company.

YOUR ROLE AS HOST

During an audit, a distiller must remain focused and ensure assessments. While there may be good that the company speaks with one voice. Before the audit starts, reasons to agree to such a request designate a single person to act as TTB’s initial point-of-contact from TTB, the decision needs to be for all audit matters. Designate someone with enough time to made after careful thought, ideally respond to what can be a slew of questions and emails, but with with the help of experienced legal an understanding of the distillery’s operations and its compliance counsel. aspects. Of course, TTB can speak with others at the distillery,

Similarly, agreeing to any but maintaining a single initial point of contact and having conclusions presented by TTB can that person present in all substantive conversations helps keep have severe legal consequences control over the process. And as a housekeeping measure, the in the future. While TTB is point-of-contact should possess a Power-of-Attorney (TTB Form entitled to receive truthful answers 5000.8) or Corporate Signature Authority (TTB Form 5000.1) to to factual questions, they are not deal with TTB on behalf of the company. entitled to demand confirmation of While most issues do not give rise to later disputes with tax or legal conclusions. Never admit TTB, if they do you will want to know what evidence TTB has anything that sounds like a legal conclusion in its possession. For this reason, while TTB has the right to (“would you say Mr. Smith did this willfully?”), review and make copies of virtually all distillery records (with at least without consulting with a lawyer first. the significant exception of any privileged communications), the Depending on the size of the distillery, the size of TTB’s distillery should know what documents TTB has reviewed and audit team, and the complexity of any issues encountered, copied. With very few exceptions, TTB should not take original TTB personnel may work on-site at the distillery for a few days records from the distillery premises. If TTB asks to take photos, or several weeks, and in rare cases even longer. Today, TTB ensure that you also photograph the area(s) of interest to the TTB personnel often also work off-site (presumably at their offices) Auditor or Inspector. Similarly, should TTB take samples of, for for some part of the audit before it “closes.” example, a particular batch of spirits for later testing, the distillery should preserve one or more samples for its own testing in case

a dispute arises with respect to the test results found by TTB.

The audit process generally ends with a “closing conference”

As noted above, it is important to preserve the confidentiality between members of the TTB audit team and distillery