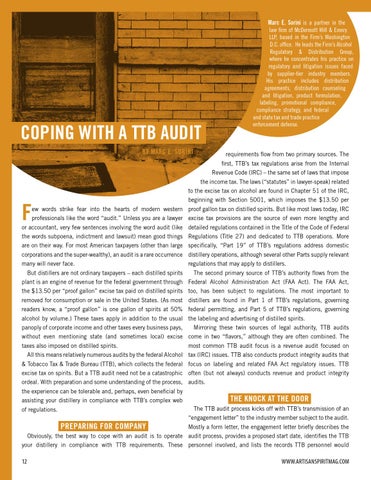 COPING WITH A TTB AUDIT BY MARC E. SORINI

to the excise tax on alcohol are found in Chapter 51 of the IRC, beginning with Section 5001, which imposes the $13.50 per

ew words strike fear into the hearts of modern western proof gallon tax on distilled spirits. But like most laws today, IRC professionals like the word “audit.” Unless you are a lawyer excise tax provisions are the source of even more lengthy and

or accountant, very few sentences involving the word audit (like detailed regulations contained in the Title of the Code of Federal the words subpoena, indictment and lawsuit) mean good things Regulations (Title 27) and dedicated to TTB operations. More are on their way. For most American taxpayers (other than large specifically, “Part 19” of TTB’s regulations address domestic corporations and the super-wealthy), an audit is a rare occurrence distillery operations, although several other Parts supply relevant many will never face. But distillers are not ordinary taxpayers – each distilled spirits

regulations that may apply to distillers. The second primary source of TTB’s authority flows from the

plant is an engine of revenue for the federal government through Federal Alcohol Administration Act (FAA Act). The FAA Act, the $13.50 per “proof gallon” excise tax paid on distilled spirits too, has been subject to regulations. The most important to removed for consumption or sale in the United States. (As most distillers are found in Part 1 of TTB’s regulations, governing readers know, a “proof gallon” is one gallon of spirits at 50% federal permitting, and Part 5 of TTB’s regulations, governing alcohol by volume.) These taxes apply in addition to the usual the labeling and advertising of distilled spirits. panoply of corporate income and other taxes every business pays,

without even mentioning state (and sometimes local) excise come in two “flavors,” although they are often combined. The taxes also imposed on distilled spirits.

All this means relatively numerous audits by the federal Alcohol tax (IRC) issues. TTB also conducts product integrity audits that &amp; Tobacco Tax &amp; Trade Bureau (TTB), which collects the federal focus on labeling and related FAA Act regulatory issues. TTB excise tax on spirits. But a TTB audit need not be a catastrophic often (but not always) conducts revenue and product integrity ordeal. With preparation and some understanding of the process, audits. the experience can be tolerable and, perhaps, even beneficial by assisting your distillery in compliance with TTB’s complex web

Obviously, the best way to cope with an audit is to operate audit process, provides a proposed start date, identifies the TTB your distillery in compliance with TTB requirements. These personnel involved, and lists the records TTB personnel would