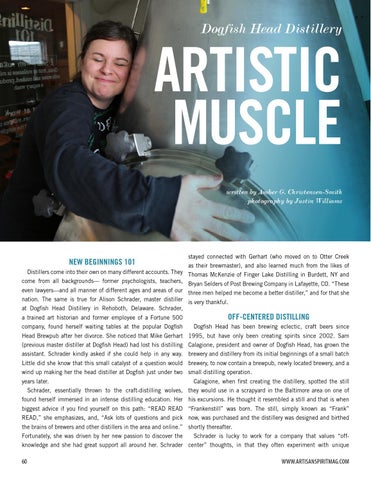 stayed connected with Gerhart (who moved on to Otter Creek

as their brewmaster), and also learned much from the likes of Distillers come into their own on many different accounts. They Thomas McKenzie of Finger Lake Distilling in Burdett, NY and come from all backgrounds— former psychologists, teachers, Bryan Selders of Post Brewing Company in Lafayette, CO. “These even lawyers—and all manner of different ages and areas of our three men helped me become a better distiller,” and for that she nation. The same is true for Alison Schrader, master distiller is very thankful. at Dogfish Head Distillery in Rehoboth, Delaware. Schrader, a trained art historian and former employee of a Fortune 500 company, found herself waiting tables at the popular Dogfish

Head Brewpub after her divorce. She noticed that Mike Gerhart 1995, but have only been creating spirits since 2002. Sam (previous master distiller at Dogfish Head) had lost his distilling Calagione, president and owner of Dogfish Head, has grown the assistant. Schrader kindly asked if she could help in any way. brewery and distillery from its initial beginnings of a small batch Little did she know that this small catalyst of a question would brewery, to now contain a brewpub, newly located brewery, and a wind up making her the head distiller at Dogfish just under two small distilling operation. years later.

Calagione, when first creating the distillery, spotted the still

Schrader, essentially thrown to the craft-distilling wolves, they would use in a scrapyard in the Baltimore area on one of found herself immersed in an intense distilling education. Her his excursions. He thought it resembled a still and that is when biggest advice if you find yourself on this path: “READ READ “Frankenstill” was born. The still, simply known as “Frank” READ,” she emphasizes, and, “Ask lots of questions and pick now, was purchased and the distillery was designed and birthed the brains of brewers and other distillers in the area and online.” shortly thereafter. Fortunately, she was driven by her new passion to discover the

Schrader is lucky to work for a company that values “off-

knowledge and she had great support all around her. Schrader center” thoughts, in that they often experiment with unique