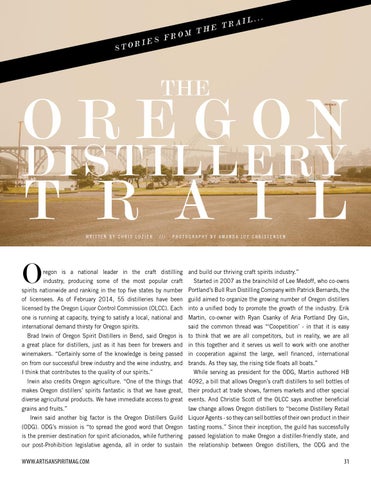 regon is a national leader in the craft distilling and build our thriving craft spirits industry.” industry, producing some of the most popular craft

Started in 2007 as the brainchild of Lee Medoff, who co-owns

spirits nationwide and ranking in the top five states by number Portland’s Bull Run Distilling Company with Patrick Bernards, the of licensees. As of February 2014, 55 distilleries have been guild aimed to organize the growing number of Oregon distillers licensed by the Oregon Liquor Control Commission (OLCC). Each into a unified body to promote the growth of the industry. Erik one is running at capacity, trying to satisfy a local, national and Martin, co-owner with Ryan Csanky of Aria Portland Dry Gin, international demand thirsty for Oregon spirits.

said the common thread was “‘Coopetition’ - in that it is easy

Brad Irwin of Oregon Spirit Distillers in Bend, said Oregon is to think that we are all competitors, but in reality, we are all a great place for distillers, just as it has been for brewers and in this together and it serves us well to work with one another winemakers. “Certainly some of the knowledge is being passed in cooperation against the large, well financed, international on from our successful brew industry and the wine industry, and brands. As they say, the rising tide floats all boats.” I think that contributes to the quality of our spirits.”

While serving as president for the ODG, Martin authored HB

Irwin also credits Oregon agriculture. “One of the things that 4092, a bill that allows Oregon’s craft distillers to sell bottles of makes Oregon distillers’ spirits fantastic is that we have great, their product at trade shows, farmers markets and other special diverse agricultural products. We have immediate access to great events. And Christie Scott of the OLCC says another beneficial grains and fruits.”

Irwin said another big factor is the Oregon Distillers Guild Liquor Agents - so they can sell bottles of their own product in their (ODG). ODG’s mission is “to spread the good word that Oregon tasting rooms.” Since their inception, the guild has successfully is the premier destination for spirit aficionados, while furthering passed legislation to make Oregon a distiller-friendly state, and our post-Prohibition legislative agenda, all in order to sustain the relationship between Oregon distillers, the ODG and the