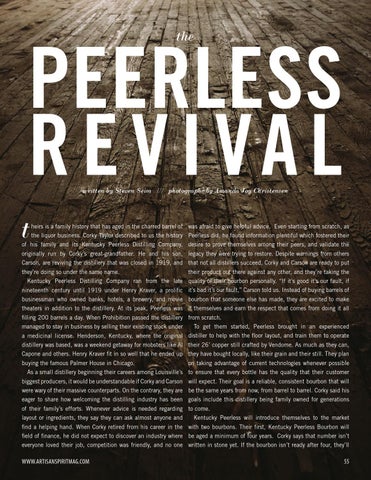 heirs is a family history that has aged in the charred barrel of was afraid to give helpful advice. Even starting from scratch, as the liquor business. Corky Taylor described to us the history Peerless did, he found information plentiful which fostered their

of his family and its Kentucky Peerless Distilling Company, desire to prove themselves among their peers, and validate the originally run by Corky’s great-grandfather. He and his son, legacy they were trying to restore. Despite warnings from others Carson, are reviving the distillery that was closed in 1919, and that not all distillers succeed, Corky and Carson are ready to put they’re doing so under the same name.

their product out there against any other, and they’re taking the

Kentucky Peerless Distilling Company ran from the late quality of their bourbon personally. “If it’s good it’s our fault, if nineteenth century until 1919 under Henry Kraver, a prolific it’s bad it’s our fault,” Carson told us. Instead of buying barrels of businessman who owned banks, hotels, a brewery, and movie bourbon that someone else has made, they are excited to make theaters in addition to the distillery. At its peak, Peerless was it themselves and earn the respect that comes from doing it all filling 200 barrels a day. When Prohibition passed the distillery from scratch. managed to stay in business by selling their existing stock under

To get them started, Peerless brought in an experienced

a medicinal license. Henderson, Kentucky, where the original distiller to help with the floor layout, and train them to operate distillery was based, was a weekend getaway for mobsters like Al their 26’ copper still crafted by Vendome. As much as they can, Capone and others. Henry Kraver fit in so well that he ended up they have bought locally, like their grain and their still. They plan buying the famous Palmer House in Chicago.

on taking advantage of current technologies whenever possible

As a small distillery beginning their careers among Louisville’s to ensure that every bottle has the quality that their customer biggest producers, it would be understandable if Corky and Carson will expect. Their goal is a reliable, consistent bourbon that will were wary of their massive counterparts. On the contrary, they are be the same years from now, from barrel to barrel. Corky said his eager to share how welcoming the distilling industry has been goals include this distillery being family owned for generations of their family’s efforts. Whenever advice is needed regarding to come. layout or ingredients, they say they can ask almost anyone and

Kentucky Peerless will introduce themselves to the market

find a helping hand. When Corky retired from his career in the with two bourbons. Their first, Kentucky Peerless Bourbon will field of finance, he did not expect to discover an industry where be aged a minimum of four years. Corky says that number isn’t everyone loved their job, competition was friendly, and no one written in stone yet. If the bourbon isn’t ready after four, they’ll