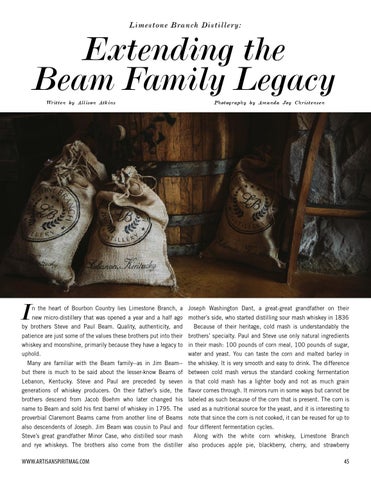 n the heart of Bourbon Country lies Limestone Branch, a Joseph Washington Dant, a great-great grandfather on their new micro-distillery that was opened a year and a half ago mother’s side, who started distilling sour mash whiskey in 1836

by brothers Steve and Paul Beam. Quality, authenticity, and

Because of their heritage, cold mash is understandably the

patience are just some of the values these brothers put into their brothers’ specialty. Paul and Steve use only natural ingredients whiskey and moonshine, primarily because they have a legacy to in their mash: 100 pounds of corn meal, 100 pounds of sugar, uphold.

water and yeast. You can taste the corn and malted barley in

Many are familiar with the Beam family--as in Jim Beam-- the whiskey. It is very smooth and easy to drink. The difference but there is much to be said about the lesser-know Beams of between cold mash versus the standard cooking fermentation Lebanon, Kentucky. Steve and Paul are preceded by seven is that cold mash has a lighter body and not as much grain generations of whiskey producers. On their father’s side, the flavor comes through. It mirrors rum in some ways but cannot be brothers descend from Jacob Boehm who later changed his labeled as such because of the corn that is present. The corn is name to Beam and sold his first barrel of whiskey in 1795. The used as a nutritional source for the yeast, and it is interesting to proverbial Claremont Beams came from another line of Beams note that since the corn is not cooked, it can be reused for up to also descendents of Joseph. Jim Beam was cousin to Paul and four different fermentation cycles. Steve’s great grandfather Minor Case, who distilled sour mash

Along with the white corn whiskey, Limestone Branch