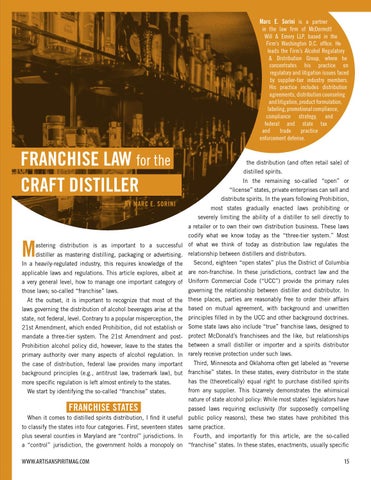 FRANCHISE LAW for the CRAFT DISTILLER BY MARC E. SORINI

the distribution (and often retail sale) of distilled spirits. In the remaining so-called “open” or “license” states, private enterprises can sell and distribute spirits. In the years following Prohibition, most states gradually enacted laws prohibiting or severely limiting the ability of a distiller to sell directly to a retailer or to own their own distribution business. These laws codify what we know today as the “three-tier system.” Most

astering distribution is as important to a successful of what we think of today as distribution law regulates the distiller as mastering distilling, packaging or advertising. relationship between distillers and distributors.

In a heavily-regulated industry, this requires knowledge of the

Second, eighteen “open states” plus the District of Columbia

applicable laws and regulations. This article explores, albeit at are non-franchise. In these jurisdictions, contract law and the a very general level, how to manage one important category of Uniform Commercial Code (“UCC”) provide the primary rules those laws; so-called “franchise” laws.

governing the relationship between distiller and distributor. In

At the outset, it is important to recognize that most of the these places, parties are reasonably free to order their affairs laws governing the distribution of alcohol beverages arise at the based on mutual agreement, with background and unwritten state, not federal, level. Contrary to a popular misperception, the principles filled in by the UCC and other background doctrines. 21st Amendment, which ended Prohibition, did not establish or Some state laws also include “true” franchise laws, designed to mandate a three-tier system. The 21st Amendment and post- protect McDonald’s franchisees and the like, but relationships Prohibition alcohol policy did, however, leave to the states the between a small distiller or importer and a spirits distributor primary authority over many aspects of alcohol regulation. In rarely receive protection under such laws. Third, Minnesota and Oklahoma often get labeled as “reverse the case of distribution, federal law provides many important background principles (e.g., antitrust law, trademark law), but franchise” states. In these states, every distributor in the state has the (theoretically) equal right to purchase distilled spirits more specific regulation is left almost entirely to the states. We start by identifying the so-called “franchise” states.

from any supplier. This bizarrely demonstrates the whimsical nature of state alcohol policy: While most states’ legislators have passed laws requiring exclusivity (for supposedly compelling

When it comes to distilled spirits distribution, I find it useful public policy reasons), these two states have prohibited this to classify the states into four categories. First, seventeen states same practice. plus several counties in Maryland are “control” jurisdictions. In

Fourth, and importantly for this article, are the so-called

a “control” jurisdiction, the government holds a monopoly on “franchise” states. In these states, enactments, usually specific