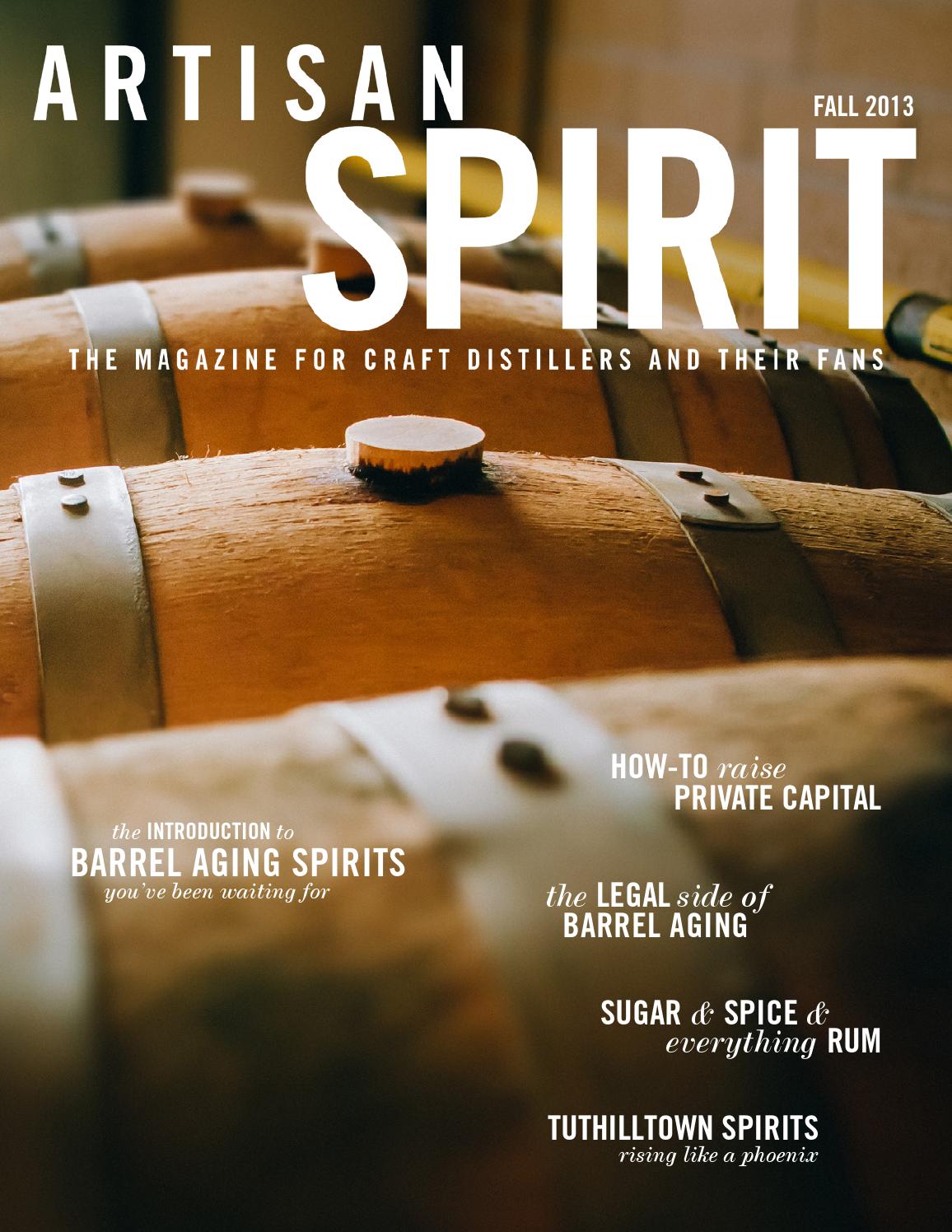 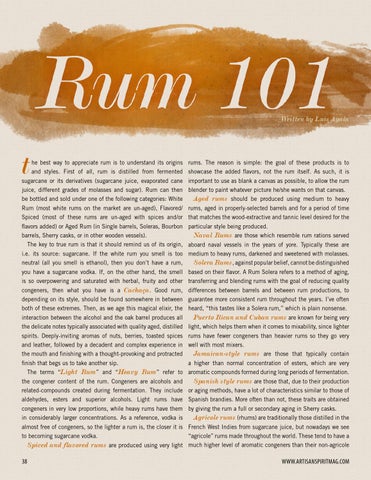 he best way to appreciate rum is to understand its origins rums. The reason is simple: the goal of these products is to and styles. First of all, rum is distilled from fermented showcase the added flavors, not the rum itself. As such, it is

sugarcane or its derivatives (sugarcane juice, evaporated cane important to use as blank a canvas as possible, to allow the rum juice, different grades of molasses and sugar). Rum can then blender to paint whatever picture he/she wants on that canvas. be bottled and sold under one of the following categories: White

should be produced using medium to heavy

Rum (most white rums on the market are un-aged), Flavored/ rums, aged in properly-selected barrels and for a period of time Spiced (most of these rums are un-aged with spices and/or that matches the wood-extractive and tannic level desired for the flavors added) or Aged Rum (in Single barrels, Soleras, Bourbon particular style being produced.

barrels, Sherry casks, or in other wooden vessels).

are those which resemble rum rations served

The key to true rum is that it should remind us of its origin, aboard naval vessels in the years of yore. Typically these are i.e. its source: sugarcane. If the white rum you smell is too medium to heavy rums, darkened and sweetened with molasses. neutral (all you smell is ethanol), then you don’t have a rum,

you have a sugarcane vodka. If, on the other hand, the smell based on their flavor. A Rum Solera refers to a method of aging, is so overpowering and saturated with herbal, fruity and other transferring and blending rums with the goal of reducing quality congeners, then what you have is a

Good rum, differences between barrels and between rum productions, to

depending on its style, should be found somewhere in between guarantee more consistent rum throughout the years. I’ve often both of these extremes. Then, as we age this magical elixir, the heard, “this tastes like a Solera rum,” which is plain nonsense. interaction between the alcohol and the oak barrel produces all

Puerto Rican and Cuban rums are known for being very

the delicate notes typically associated with quality aged, distilled light, which helps them when it comes to mixability, since lighter spirits. Deeply-inviting aromas of nuts, berries, toasted spices rums have fewer congeners than heavier rums so they go very and leather, followed by a decadent and complex experience in well with most mixers. the mouth and finishing with a thought-provoking and protracted finish that begs us to take another sip. The terms “Light

are those that typically contain

a higher than normal concentration of esters, which are very

refer to aromatic compounds formed during long periods of fermentation.

the congener content of the rum. Congeners are alcohols and

Spanish style rums are those that, due to their production

related-compounds created during fermentation. They include or aging methods, have a lot of characteristics similar to those of aldehydes, esters and superior alcohols. Light rums have Spanish brandies. More often than not, these traits are obtained congeners in very low proportions, while heavy rums have them by giving the rum a full or secondary aging in Sherry casks. in considerably larger concentrations. As a reference, vodka is

Agricole rums (rhums) are traditionally those distilled in the

almost free of congeners, so the lighter a rum is, the closer it is French West Indies from sugarcane juice, but nowadays we see to becoming sugarcane vodka.

“agricole” rums made throughout the world. These tend to have a much higher level of aromatic congeners than their non-agricole