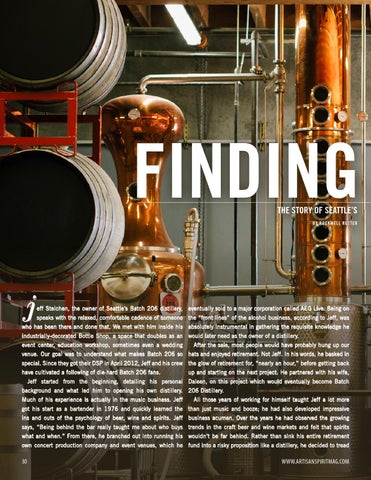 FINDING THE STORY OF SEATTLE’S BY ROCKWELL RUTTER

eff Steichen, the owner of Seattle’s Batch 206 distillery, eventually sold to a major corporation called AEG Live. Being on speaks with the relaxed, comfortable cadence of someone the “front lines” of the alcohol business, according to Jeff, was

who has been there and done that. We met with him inside his absolutely instrumental in gathering the requisite knowledge he industrially-decorated Bottle Shop, a space that doubles as an would later need as the owner of a distillery. event center, education workshop, sometimes even a wedding

After the sale, most people would have probably hung up our

venue. Our goal was to understand what makes Batch 206 so hats and enjoyed retirement. Not Jeff. In his words, he basked in special. Since they got their DSP in April 2012, Jeff and his crew the glow of retirement for, “nearly an hour,” before getting back have cultivated a following of die-hard Batch 206 fans.

up and starting on the next project. He partnered with his wife,

Jeff started from the beginning, detailing his personal Daleen, on this project which would eventually become Batch background and what led him to opening his own distillery. 206 Distillery. Much of his experience is actually in the music business. Jeff

got his start as a bartender in 1976 and quickly learned the than just music and booze; he had also developed impressive ins and outs of the psychology of beer, wine and spirits. Jeff business acumen. Over the years he had observed the growing says, “Being behind the bar really taught me about who buys trends in the craft beer and wine markets and felt that spirits what and when.” From there, he branched out into running his wouldn’t be far behind. Rather than sink his entire retirement own concert production company and event venues, which he fund into a risky proposition like a distillery, he decided to tread