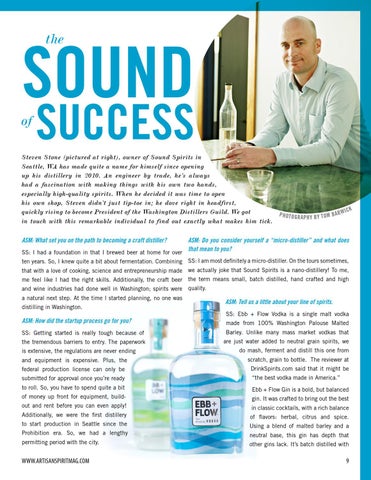 Steven Stone (pictured at right), owner of Sound Spirits in Seattle, WA has made quite a name for himself since opening up his distillery in 2010. An engineer by trade, he’s always had a fascination with making things with his own two hands, especially high-quality spirits. When he decided it was time to open his own shop, Steven didn’t just tip-toe in; he dove right in headfirst, ick quickly rising to become President of the Washington Distillers Guild. We got P hotogra y by Tom Ba rw ph in touch with this remarkable individual to find out exactly what makes him tick.

ASM: What set you on the path to becoming a craft distiller?

ASM: Do you consider yourself a “micro-distiller” and what does that mean to you? SS: I had a foundation in that I brewed beer at home for over ten years. So, I knew quite a bit about fermentation. Combining SS: I am most definitely a micro-distiller. On the tours sometimes, that with a love of cooking, science and entrepreneurship made we actually joke that Sound Spirits is a nano-distillery! To me, me feel like I had the right skills. Additionally, the craft beer the term means small, batch distilled, hand crafted and high and wine industries had done well in Washington; spirits were quality. a natural next step. At the time I started planning, no one was distilling in Washington.

ASM: How did the startup process go for you?

ASM: Tell us a little about your line of spirits. SS: Ebb + Flow Vodka is a single malt vodka made from 100% Washington Palouse Malted

SS: Getting started is really tough because of

Barley. Unlike many mass market vodkas that

the tremendous barriers to entry. The paperwork

are just water added to neutral grain spirits, we

is extensive, the regulations are never ending

do mash, ferment and distill this one from

and equipment is expensive. Plus, the

scratch, grain to bottle. The reviewer at

federal production license can only be

submitted for approval once you’re ready

“the best vodka made in America.”

to roll. So, you have to spend quite a bit

Ebb + Flow Gin is a bold, but balanced

of money up front for equipment, build-

gin. It was crafted to bring out the best

out and rent before you can even apply!

in classic cocktails, with a rich balance

Additionally, we were the first distillery

of flavors: herbal, citrus and spice.

to start production in Seattle since the

Using a blend of malted barley and a

Prohibition era. So, we had a lengthy

neutral base, this gin has depth that

permitting period with the city.