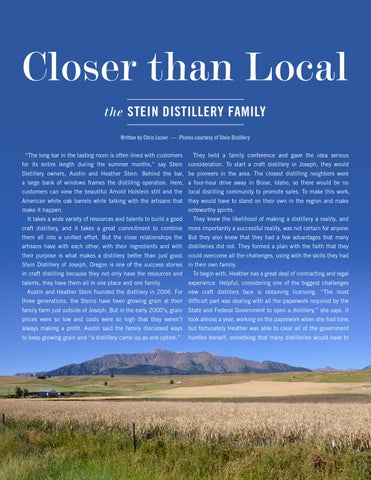 They held a family conference and gave the idea serious

for its entire length during the summer months,” say Stein

consideration. To start a craft distillery in Joseph, they would

Distillery owners, Austin and Heather Stein. Behind the bar, be pioneers in the area. The closest distilling neighbors were a large bank of windows frames the distilling operation. Here, a four-hour drive away in Boise, Idaho, so there would be no customers can view the beautiful Arnold Holstein still and the

local distilling community to promote sales. To make this work,

American white oak barrels while talking with the artisans that they would have to stand on their own in the region and make make it happen. It takes a wide variety of resources and talents to build a good

noteworthy spirits. They knew the likelihood of making a distillery a reality, and

craft distillery, and it takes a great commitment to combine

more importantly a successful reality, was not certain for anyone.

them all into a unified effort. But the close relationships the

artisans have with each other, with their ingredients and with

distilleries did not. They formed a plan with the faith that they

their purpose is what makes a distillery better than just good. could overcome all the challenges, using with the skills they had Stein Distillery of Joseph, Oregon is one of the success stories in craft distilling because they not only have the resources and talents, they have them all in one place and one family.

in their own family. To begin with, Heather has a great deal of contracting and legal experience. Helpful, considering one of the biggest challenges

Austin and Heather Stein founded the distillery in 2006. For new craft distillers face is obtaining licensing. “The most three generations, the Steins have been growing grain at their difficult part was dealing with all the paperwork required by the family farm just outside of Joseph. But in the early 2000’s, grain State and Federal Government to open a distillery,” she says. It prices were so low and costs were so high that they weren’t

took almost a year, working on the paperwork when she had time,

but fortunately Heather was able to clear all of the government

to keep growing grain and “a distillery came up as one option.”

hurdles herself, something that many distilleries would have to