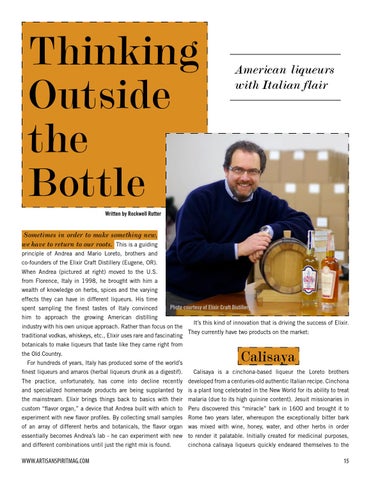 Thinking Outside the Bottle

in order to make something new, we have to return to our roots.. This is a guiding

principle of Andrea and Mario Loreto, brothers and co-founders of the Elixir Craft Distillery (Eugene, OR). When Andrea (pictured at right) moved to the U.S. from Florence, Italy in 1998, he brought with him a wealth of knowledge on herbs, spices and the varying effects they can have in different liqueurs. His time spent sampling the finest tastes of Italy convinced

him to approach the growing American distilling industry with his own unique approach. Rather than focus on the traditional vodkas, whiskeys, etc., Elixir uses rare and fascinating botanicals to make liqueurs that taste like they came right from the Old Country. For hundreds of years, Italy has produced some of the world’s finest liqueurs and amaros (herbal liqueurs drunk as a digestif).

It’s this kind of innovation that is driving the success of Elixir. They currently have two products on the market:

The practice, unfortunately, has come into decline recently developed from a centuries-old authentic Italian recipe. Cinchona and specialized homemade products are being supplanted by is a plant long celebrated in the New World for its ability to treat the mainstream. Elixir brings things back to basics with their malaria (due to its high quinine content). Jesuit missionaries in custom “flavor organ,” a device that Andrea built with which to Peru discovered this “miracle” bark in 1600 and brought it to experiment with new flavor profiles. By collecting small samples Rome two years later, whereupon the exceptionally bitter bark of an array of different herbs and botanicals, the flavor organ was mixed with wine, honey, water, and other herbs in order essentially becomes Andrea’s lab - he can experiment with new to render it palatable. Initially created for medicinal purposes, and different combinations until just the right mix is found.

cinchona calisaya liqueurs quickly endeared themselves to the