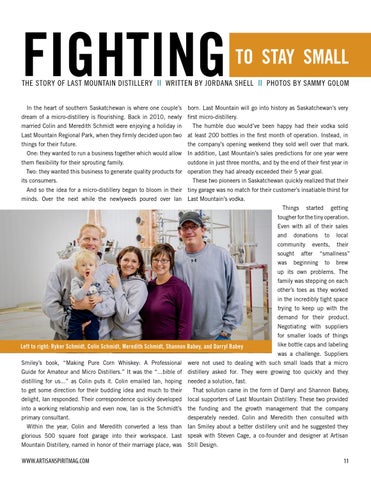 The Story of Last Mountain Distillery || written by Jordana Shell || pHOTOs By Sammy Golom In the heart of southern Saskatchewan is where one couple’s dream of a micro-distillery is flourishing. Back in 2010, newly

married Colin and Meredith Schmidt were enjoying a holiday in

The humble duo would’ve been happy had their vodka sold

Last Mountain Regional Park, when they firmly decided upon two

at least 200 bottles in the first month of operation. Instead, in

things for their future.

the company’s opening weekend they sold well over that mark.

One: they wanted to run a business together which would allow In addition, Last Mountain’s sales predictions for one year were them flexibility for their sprouting family.

outdone in just three months, and by the end of their first year in

Two: they wanted this business to generate quality products for operation they had already exceeded their 5 year goal. its consumers.

These two pioneers in Saskatchewan quickly realized that their

And so the idea for a micro-distillery began to bloom in their tiny garage was no match for their customer’s insatiable thirst for minds. Over the next while the newlyweds poured over Ian

tougher for the tiny operation. Even with all of their sales and

up its own problems. The family was stepping on each other’s toes as they worked in the incredibly tight space trying to keep up with the demand for their product. Negotiating with suppliers for smaller loads of things

like bottle caps and labeling was a challenge. Suppliers

Guide for Amateur and Micro Distillers.” It was the “...bible of distillery asked for. They were growing too quickly and they distilling for us...” as Colin puts it. Colin emailed Ian, hoping

That solution came in the form of Darryl and Shannon Babey,

into a working relationship and even now, Ian is the Schmidt’s

the funding and the growth management that the company

desperately needed. Colin and Meredith then consulted with

Within the year, Colin and Meredith converted a less than Ian Smiley about a better distillery unit and he suggested they glorious 500 square foot garage into their workspace. Last

speak with Steven Cage, a co-founder and designer at Artisan

Mountain Distillery, named in honor of their marriage place, was