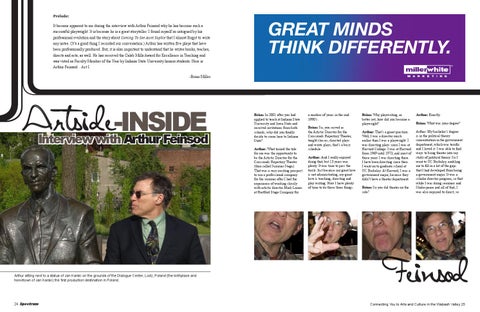 Prelude: It became apparent to me during the interview with Arthur Feinsod why he has become such a successful playwright. It is because he is a great storyteller. I found myself so intrigued by his professional evolution and the story about Coming To See Aunt Sophie that I almost forgot to write any notes. (It’s a good thing I recorded our conversation.) Arthur has written five plays that have been professionally produced. But, it is also important to understand that he writes books, teaches, directs and acts, as well. He has received the Caleb Mills Award for Excellence in Teaching and was voted as Faculty Member of the Year by Indiana State University honors students. Here is Arthur Feinsod…Act I.

Arthur sitting next to a statue of Jan Karski on the grounds of the Dialogue Center, Lodz, Poland (the birthplace and hometown of Jan Karski) the first production destination in Poland.

Brian: In 2001 after you had applied to teach at Indiana State University and Iowa State and received invitations from both schools, why did you finally decide to come here to Indiana State? Arthur: What turned the tide for me was the opportunity to be the Artistic Director for the Crossroads Repertory Theater (then called Summer Stage). That was a very exciting prospect to run a professional company for the summer after I had the experience of working closely with artistic director Mark Lamos at Hartford Stage Company for

a number of years in the mid 1990’s. Brian: So, you served as the Artistic Director for the Crossroads Repertory Theater, taught classes, directed plays and wrote plays, that’s a busy schedule. Arthur: And I really enjoyed doing that, but 13 years was plenty. It was time to pass the torch. Just because my great love is not administrating, my great love is teaching, directing and play writing. Now I have plenty of time to do those three things.

Brian: Why playwriting, or better yet, how did you become a playwright?

Arthur: That’s a great question. Well, I was a director much earlier than I was a playwright. I was directing plays since I was at Harvard College. I was at Harvard from 1969 until 1973, and most of those years I was directing there. I have been directing since then. I went on to graduate school at UC Berkeley. At Harvard, I was a government major, because they didn’t have a theater department.

Arthur: My bachelor’s degree is in the political theory concentration in the government department, which was terrific and I loved it. I was able to find ways to bring theater into my study of political theory. So I went to UC Berkeley, enabling me to fill in a lot of the gaps that I had developed from being a government major. It was a scholar director program, so that while I was doing seminars and Shakespeare and all of that, I was also required to direct, so

Brian: So you did theater on the side?

Brian: What was your degree?

Brad Venable as Old Karski in a production of Coming to See Aunt Sophie.

So while I was doing my Ph.D. at NYU, I would go out to Long Island every weekend and cowrite with this former teacher of mine, who was a professional playwright. Brian: What was his name? Arthur: His name was Maurice Schneider. So he and I would write every weekend. We ended up writing a play titled Play For Keeps. It was about a young Harvard student teaching in a maximum-security prison.

it honed my directing skills that I had developed at Harvard but I didn’t take a directing class. I was just sort of doing it, but at UC Berkeley I finally received training in it. So to get back to your question regarding playwriting, directing started a lot earlier. After UC Berkeley, I started teaching at a prep school (private school) in California and started a little theater company in Berkeley. I decided to come back east in order to finish my Ph.D. at NYU (New York University). NYU has a very strong theater program in Performance Studies. Brian: You were acting and

directing, so what inspired you to write plays? Arthur: It was a fortuitous thing. It was 1983, and I was directing something in New York City. My former middle school teacher came to see the play. Over dinner I told him the story of how I had taught at a maximum-security prison while I was at Harvard. I taught at Walpole State Prison with people in it like the Boston Strangler (he was actually in one of my acting classes). So I told my former teacher about my experience. He suggested to me that we write a play together about my experience teaching in this maximum-security prison. I said, “Sure, no problem.”

We sent it to David Susskind, who had formed a company called Talent Associates, and who was producing plays at the time. He loved it and optioned it. He called me and told me that this play was brilliant and was going to go to Broadway, etc. I was thinking, “I’m just a college kid getting my Ph.D. at NYU and now this…wow! And of course as what often happens with those things, we thought we were going to go right up with the elevator. However, right after that Susskind invested in a musical about Charlie Chaplin and it died in Boston. He lost like a million dollars of his own money, and he lost his appetite to do anything else with the theater. And, so he just did nothing with the Play For Keeps option. Mo (Maurice) and I started working on another play and nothing ever happened with that either. Brian: What happened next? Arthur: I continued to write plays on my own while I was a professor of theater at Trinity College teaching playwriting and history along with directing. Brian: So you never really took any classes in writing plays. Arthur: That’s right. I am a selftaught playwright. Brian: What do you like about it? Arthur: You know it’s

interesting. There are two aspects about it that make it very attractive to me. There is the alone part of it where you go off into the world of your play just with your computer. You immerse yourself in the world to do research to better understand the people you are writing about and their culture. It is a very solitary process. It soon becomes very public. If the play is good and starts to become of interest to a company, you work with a director, actors, set and costume designers (I don’t normally direct the plays I write but I did when I was at Trinity College). Lots of people start getting involved in the play and suddenly something that was a very private process becomes very public. You are listening to your lines being read by actors and seeing a director having his or her interpretation of your play. You realize you need collaborators for the play to see the light of day…to be on stage in an effective way.

next morning at breakfast she asked if I had ever heard of this man, and I replied no. She said that he was a Polish Catholic courier during World War II who became very invested in helping the Polish Jews and getting the word out to the rest of the world about the their fate and the ensuing Holocaust. She told me the story and it was fascinating. And, she said that it was the 100th anniversary of his birth. He was born in 1914. This is a time that Poland was really looking for a play about him, but no one had written a play about him. So she said precisely, “Arthur, you are the one to write this play.” Because of all of her contacts in Poland, and Mary telling them about my play, representatives of the Polish government and the Warsaw cultural scene wanted my play. Poland was very interested in my play before I had even written it.

Brian: Did you feel any pressure with this situation? Arthur: Yes, a little pressure. This was totally new from anything else I had experienced. My entire life before this I wrote plays and had to constantly knock on doors and say, “Please look at my play, please look at my play, please look at my play.” And, now, here are people knocking on my door wanting my play and I hadn’t even written it yet. Brian: How long did it take to write this play? Arthur: Before February 2013, I had never heard of Jan Karski. So when Mary asked me to write a play about him, I ask her to send me a book about him. She said no problem. Two months later I had almost forgotten about it but then I received a book by Thomas Wood entitled Karski: How One

Man Tried to Stop the Holocaust. So I read the book and I was totally fascinated by it. I started reading and reading about Karski. He had written his own book entitled Story of a Secret State, so I read that one, and I immersed myself in researching everything I could find about him. I read for about nine months about Jan Karski and had not yet put pen to paper. Sometime around December 2013 at the end of the semester with all the papers due and exams coming in, I am crazy busy, Mary Skinner called. She said they were really interested in my play in Poland. I told her that I hadn’t even started writing it. She said, “Well, you need to put something together, because they really need to see something now.” I wasn’t planning on doing any writing until my Christmas vacation. I had researched it for nine months and it was starting to form in my head. So this of

course put the pressure on me and I wrote the first 17 pages and dashed it off to Mary and off to the director, Dale McFadden, who is head of the acting and directing program in the Indiana University Theater Department. Both Mary and Dale really liked it, gave some valuable feedback and we sent it off to Poland. They really liked it, and based on those first 17 pages they started talking to me about bringing actors from Crossroads Rep over to perform it. Talk about pressure; I still had another 65 pages to write! By January 1st, I was done with the play, at least a first draft. So it really came fast once I got started, but remember I had been thinking about it for nine months before that. -Brian Miller

Actors Alex Miller and Julie Dixon as leaders of the Jewish Underground.

Brian: Is there a demand for playwrights? Arthur: Not really. I mean there is a demand in the sense that a really good play needs to find a place for it to be done and there are places out there that need new plays to produce, but no one is sitting there waiting for your play. I learned early that in order for your play to get on the top of the pile where someone actually reads it, it is luck, skill, knowing people and a lot of other factors. Brian: Talk about how or why you created Coming To See Aunt Sophie. Arthur: In February 2013, Mary Skinner, who is a film documentary maker, came to Terre Haute to the CANDLES Holocaust Museum to screen a movie that she had done. While she was here, she said to me that she wanted to talk to me about a man named Jan Karski. The

Connecting You to Arts and Culture in the Wabash Valley 27