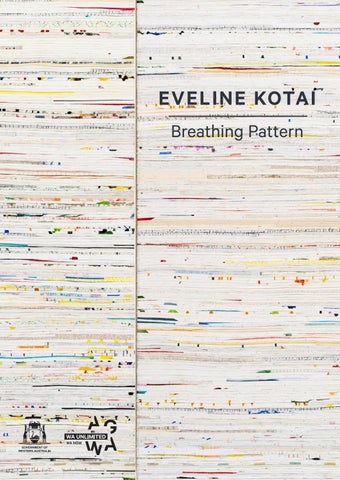 Eveline Kotai’s show Breathing Pattern is part of AGWA’s WA Now series, which has been running since 2015. This space has been considered experimental from the outset, an opportunity for local artists to work in and with the space and make it their own. Choosing to work with Kotai, a practitioner of forty years’ experience, was a deliberate decision: known for her meticulous process of pattern, schematics, and colour dissolution, with a deep thought approach to making, meant that she would engage with the space on her own terms and, importantly, with a different tempo. Different for her, but also different for us. It is this tempo, the pace, which makes Kotai’s work unique and fascinating; I hope the exhibition captures and radiates that.

surfaces, echoes a world in perpetual motion, transition and continuation. Like a computer program trying to repair itself or a human mind trying to get to know itself, new paths are found, new solutions forged. This method of cutting and stitching her canvasses anew provides Kotai with, not only a never-ending source of new beginnings, but also an important meditative practice, a kind of breathing pattern. Breathing Pattern is accompanied by the Art Collective WA publication on Kotai’s work called Eveline Kotai: Invisible Threads (2019). The text in this catalogue is from her talk given in 2013. It accurately captures what her mode of working and thinking has been as well as the lightness with which one can approach her work. In a world where authoritative texts dominate our experience of art, this one is a breath of fresh air.

Over the past twenty years, Kotai’s interest in material dissolution and regeneration has culminated in the practice and process of cutting up and reworking her own paintings into new works. Her unique technique of reconfiguring pre-existing works into new compositions via invisible thread, and onto new

In the visual art realm expressions of humanity have, over centuries, been abbreviated for convenience into movements and ‘isms’. It appears to me that once an artist is ‘ismed’ into a framework of historical context they are referred to as ‘of their time’ and, by implication, outmoded.

In conversation at the Melbourne Writers Festival recently, Peter Schjeldahl, art writer for The New Yorker stated, and I quote: Art is a language of silence. You can’t talk about art. You can talk around art. I can talk about my experience of art. Artists and students these days have to write ‘artists statements’. That’s insane! What they should do is write each-others—I don’t have to paint a picture to get an English degree.

I recently overheard a gallery guide informing her attentive group that in ‘modern’ art ideas are often the main force behind the making of art, and in some cases the idea is actually MORE important than the work of art itself. We’re all familiar with that internal yawn when reading a sermon-like text to find an entry point into an image (hydroponics comes to mind—where growth is soil-less, nutrition is artificial and the plant would blow over in the first breeze). This was however a reminder of how much visual expression has been hijacked—not just by words, but also by a need to justify its existence. It used to be that ‘a picture speaks a thousand words’ and now it can require a thousand words if it is to speak. Writers have the luxury of conjuring a picture with prose—and each reader’s vision will differ.

There seems to be a reliance on text to explain visual art, to contextualise, to demystify, causing a crisis of confidence that often affects both the artist and the viewer. For the artist it can create a low murmur of doubt—a critical voiceover that influences the creative impulse. For the viewer, there can be a loss of confidence, of not seeing ‘right’. Sadly, we are now in the habit of going straight to the didactic before looking at the work, of not trusting our own ability to see, our own desire to make what we can of the artists’ intent. It’s always a relief to me when it just states the name, title, date and medium.

Interpreting art, and constructing meaning, is rightly a very serious occupation for many—art historians, theorists, patrons, curators, critics, art teachers, students, and artists themselves. But, not all artists, and I include myself here.

Having said all that, I must now attempt to give voice to my own work—just from the past fifteen years. To begin with, I feel it’s more in line with music than words, where the unfurling of complex harmonies takes one into a direct experience.

I agree, there’s an obligation for the artist to bring their inner world into sympathy with the public, but being conscious of meaning is not what drives my work and neither is the need to talk about it. Its visibility is the entry point.

Just like we Australians end up describing ourselves as the bit that’s left over after you take away all that’s ‘un’ Australian, I will begin indirectly by describing what my work is not, and see what’s left—I must clarify that this account is not fixed, in no way a judgment of other artists.

It’s not: Verbose or context driven; figurative; political or social commentary; ideas or theory based; about suffering/pain/angst of humanity; about harnessing time; historical or narrative; cynical or anti-hope; hot-housed; focused on external reality. It is, I hope: Atmospheric; incrementally built up; part of a continuum; lyrical and rhythmic; edited and distilled; based on observation and experience; disintegration and renewal of matter; obedient to and trusting of nature; inquisitive, exploratory and inspired by material; self-sufficient; focused on internal reality. Its aim is to: Awaken imagination Be still but not stagnant Evoke rather than capture Connect to unspoken thoughts Nourish and replenish Bring the mind home Present clarity, recognition and awakening The main thing that’s missing in the experience of seeing these days is time. Most people spend but a few minutes looking. One needs to live with the art, with abstract works in particular— they’re to be experienced without knowledge. Just as a photographic surface is light-sensitive, an abstract painting can be mind-sensitive, where exposure allows different projections of self at different times and in different states. You meet the painting half way. I think it is worth paraphrasing Sogyal Rinpoche, who in the Tibetan Book of Living and Dying talks about creativity, saying that one of the manifestations of enlightenment is a being through whom some degree of illumination works to benefit and inspire others—as an impulse, a spontaneous expression, ‘…just as light radiates from the sun without the sun issuing directives or giving any conscious thought to the matter’, it derives its ultimate inspiration from the dimension of truth—an energy that springs from the ground and is a source of all things.1 He goes on to say, ‘I think of a great work of art as like a moon shining in the night sky—it illuminates the world, yet its light is not its own, but borrowed from the hidden sun of the absolute— art has helped many toward glimpsing the nature of spirituality’.2 Over the past 15 years, Eveline Kotai’s interest in material dissolution and regeneration has culminated in the practice and process of cutt...

Over the past 15 years, Eveline Kotai’s interest in material dissolution and regeneration has culminated in the practice and process of cutt...