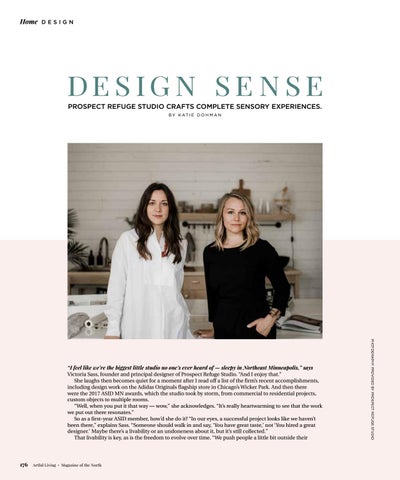 Magazine of the North

“I feel like we’re the biggest little studio no one’s ever heard of — sleepy in Northeast Minneapolis,” says Victoria Sass, founder and principal designer of Prospect Refuge Studio. “And I enjoy that.” She laughs then becomes quiet for a moment after I read off a list of the firm’s recent accomplishments, including design work on the Adidas Originals flagship store in Chicago’s Wicker Park. And then there were the 2017 ASID MN awards, which the studio took by storm, from commercial to residential projects, custom objects to multiple rooms. “Well, when you put it that way — wow,” she acknowledges. “It’s really heartwarming to see that the work we put out there resonates.” So as a first-year ASID member, how’d she do it? “In our eyes, a successful project looks like we haven’t been there,” explains Sass. “Someone should walk in and say, ‘You have great taste,’ not ‘You hired a great designer.’ Maybe there’s a livability or an undoneness about it, but it’s still collected.” That livability is key, as is the freedom to evolve over time. “We push people a little bit outside their

Artful Living, the Magazine of the North, is an elegant, intelligent publication highlighting art, culture, travel, fashion, home, food, wine and profiles meant to inspire and entertain. Founded in 2008, this quarterly magazine features beautiful design and engaging original content, bringing the best of the North to an affluent audience with impeccable taste. The Artful Living lifestyle brand is headquartered in Minneapolis. 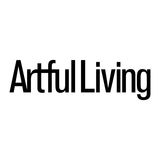