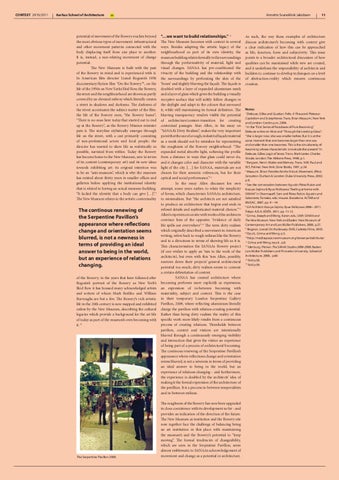 potential of movement of the Bowery reaches beyond the most obvious types of movement: infrastructural and other movement patterns connected with the body displacing itself from one place to another. It is, instead, a non-relating movement of change potential. The New Museum is built with the past of the Bowery in mind and is experienced with it. In American film director Lionel Rogosin’s 1956 documentary/fiction film “On the Bowery”8, on the life of the 1950s on New Yorks Skid Row, the Bowery, the street and the neighbourhood are shown as partly covered by an elevated railway which literally creates a street in shadows and darkness. The darkness of the street accentuates the subject matter of the film: the life of the Bowery men, “the Bowery bums”; “There is no man here today that started out to end up at the Bowery”, as the Bowery Mission minister puts it. The storyline stylistically emerges through life on the street, with a cast primarily consisting of non-professional actors and local people; the director has wanted to show life as realistically as possible, narrated from within. Today the Bowery has become home to the New Museum, new in terms of its content (contemporary art) and its new ideas towards exhibiting art: its original intention was to be an “anti-museum”, which is why the museum has existed about thirty years in smaller offices and galleries before applying the institutional identity that is related to having an actual museum-building. “It lacked the identity that a body can give […]”.9 The New Museum relates to the artistic contextuality

The continous renewing of the Serpentine Pavillon’s appearance where reflections change and orientation seems blurred, is not a newness in terms of providing an ideal answer to being in the world, but an experience of relations changing. of the Bowery; in the years that have followed after Rogosin’s portrait of the Bowery as New York’s Skid Row it has housed many acknowledged artists and writers of whom Mark Rothko and William Burroughs are but a few. The Bowery’s rich artistic life in the 20th century is now mapped and exhibited online by the New Museum, describing the cultural legacies which provide a background for the art life of today as part of the museum’s own becoming with it. 10

“…we want to build relationships.” 11 The New Museum becomes with context in several ways. Besides adapting the artistic legacy of the neighbourhood as part of its own identity, the museum building relates formally to the surroundings through the performativity of material, light and visual changes. SANAA has pre-conditioned the vivacity of the building and the relationship with the surroundings by perforating the skin of the ‘boxes’ and slightly blurring the façade. The façade is doubled with a layer of expanded aluminium mesh and a layer of glass which gives the building a visually receptive surface that will subtly follow changes in the daylight and adapt to the colours that surround it, while still maintaining its formal definition. The blurring transparency renders visible the potential of architecture/context-transition for creating contextual passages. Stan Allen, in his essay on “SANAA’s Dirty Realism”, makes the very important point that the use of a rough, industrial façade material as a mesh should not be mistaken for representing the roughness of the Bowery neighborhood: “The expanded metal absorbs light, softening the profile from a distance in ways that glass could never do, and it changes color and character with the variable light of the city. […] for SANAA, materials are not chosen for their semiotic references, but for their optical and social performance.”12 In the essay Allen discusses his own attempt, some years earlier, to relate the simplicity of forms, which characterises SANAAs architecture, to minimalism. But “the architects are not satisfied to produce an architecture that begins and ends in refined details and sophisticated material choices.”13 Allen’s experiences on site with works of the architects convince him of the opposite; “evidence of daily life spills out everywhere”.14 The term dirty realism which originally described a movement in American writing, refers back to rough milieus like the Bowery and to a directness in terms of showing life as it is. This characterisation fits SANAAs Bowery project (if one wishes to apply an ‘ism to the work of the architects), but even with this ‘ism Allen, possibly, narrows down their projects’ general architectural potential too much; dirty realism seems to connote a certain delimitation of content. SANAA has created architecture where becoming performs more explicitly as expression; an expression of in-between becoming with materiality, subject and context. This is the case in their temporary London Serpentine Gallery Pavillon, 2009, where reflecting aluminium literally charge the pavilion with relation-creating potential. Rather than being dirty realism the reality of this specific work more likely results from a continuous process of creating relations. Thresholds between pavilion, context and visitors are intentionally blurred through a continuously emerging visibility and interaction that gives the visitor an experience of being part of a process of architectural becoming. The continous renewing of the Serpentine Pavillon’s appearance where reflections change and orientation seems blurred, is not a newness in terms of providing an ideal answer to being in the world, but an experience of relations changing – and furthermore, the experience is doubled by the architects’ idea of making it the formal expression of the architecture of the pavillion. It is a process in-between temporalities and in-between milieus. The roughness of the Bowery has now been upgraded in close coexistence with its development so far - and provides an indication of the direction of the future. The New Museum as institution and the Bowery site now together face the challenge of balancing being an art institution in this place with maintaining the museum’s and the Bowery’s potential to “keep moving”. The formal tendencies of changeability, which are seen in the Serpentine Pavillon, seem almost emblematic to SANAAs acknowledgement of movement and change as a potential in architecture.

As such, the way these examples of architecture discuss architecture’s becoming with context give a clear indication of how this can be approached as life, function, form and subjectivity. This issue points to a broader architectural discussion of how qualities can be maintained while new are created, and it underlines the responsibility of architects and builders to continue to develop techniques on a level of abstraction-reality which ensures continuous creation.