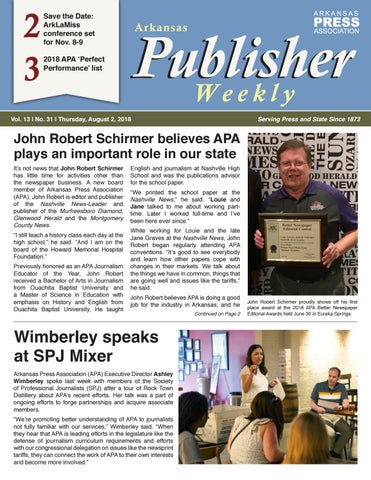 Save the Date: ArkLaMiss conference set for Nov. 8-9

It’s not news that John Robert Schirmer has little time for activities other than the newspaper business. A new board member of Arkansas Press Association (APA), John Robert is editor and publisher of the Nashville News-Leader and publisher of the Murfreesboro Diamond, Glenwood Herald and the Montgomery County News. “I still teach a history class each day at the high school,” he said. “And I am on the board of the Howard Memorial Hospital Foundation.” Previously honored as an APA Journalism Educator of the Year, John Robert received a Bachelor of Arts in Journalism from Ouachita Baptist University and a Master of Science in Education with emphasis on History and English from Ouachita Baptist University. He taught

English and journalism at Nashville High School and was the publications advisor for the school paper.

“We printed the school paper at the Nashville News,” he said. “Louie and Jane talked to me about working parttime. Later I worked full-time and I’ve been here ever since.” While working for Louie and the late Jane Graves at the Nashville News, John Robert began regularly attending APA conventions. “It’s good to see everybody and learn how other papers cope with changes in their markets. We talk about the things we have in common, things that are going well and issues like the tariffs,” he said. John Robert believes APA is doing a good job for the industry in Arkansas, and he

Arkansas Press Association (APA) Executive Director Ashley Wimberley spoke last week with members of the Society of Professional Journalists (SPJ) after a tour of Rock Town Distillery about APA’s recent efforts. Her talk was a part of ongoing efforts to forge partnerships and acquire associate members. “We’re promoting better understanding of APA to journalists not fully familiar with our services,” Wimberley said. “When they hear that APA is leading efforts in the legislature like the defense of journalism curriculum requirements and efforts with our congressional delegation on issues like the newsprint tariffs, they can connect the work of APA to their own interests and become more involved.”

Industry Quote of the Week

plans to learn more and see exactly how the board operates as a new member. He enjoys the camaraderie with other newspaper people. “The work of APA is important, especially these days when newspapers, television and radio news are under attack,” he said. “I’ve been impressed with the work APA has done on stopping changes in the FOIA and trying to stop the elimination of the requirement for journalism education. We’ve been lucky that our local State Sen. Larry Teague has been very supportive on these issues.” John Robert started the Nashville Leader with Louie and Jane Graves in 2003. He purchased the Nashville News,

Murfreesboro Diamond, Glenwood Herald and Montgomery County News from Graves Publishing Co. in 2016. At that time, he closed the Nashville News but renamed the Nashville Leader the Nashville News-Leader in recognition of the newspaper’s 138-year history. He is optimistic about newspapers like his that offer 100 percent local news. “We give the readers something they can’t get anywhere else, like coverage of high school sports and new programs at the local hospital,” he said. “I like to let people know what’s going on, do things that help the community and make sure what public officials are doing is good for the community.”

“Those who threaten the press will never win. We won’t allow it.” – Columbia Daily Tribune (in response to Capital Gazette shootings)

Save the Date: ArkLaMiss Conference Set for Nov. 8-9 Tri-state newspaper professionals will gather this fall at the Ameristar Hotel and Casino in Vicksburg for the annual ArkLaMiss Circulation, Marketing and Audience Development Conference. Publishers, general managers, circulation and audience development professionals or anyone who wants to help community newspapers and affiliated digital media increase revenue and readership are welcome. Keynote presenter is Peter Wagner of Creative House Print Media Consultants 2

and publisher and founder of the N’West Iowa REVIEW. Wagner will share practical information on circulation building, leveraging public image and community relationships and growing revenue. Events kick off with a Newspaper Round Table preceding the start of the conference at 9 a.m. on Thursday, Nov. 8. Open to newspaper publishers, editors and key personnel, the round table will cover a variety of topics including revenue, expenses, special promotions, management tips and more. Visit the ArkLaMiss website for the agenda and hotel information. Registration will open in September.

Free Webinar Next Week: Security Training for Newspapers Recent tragedies have confirmed that active shootings are a real threat to newsrooms. A free one-hour program on active shooter situations from the Online Media Campus is available at 1 p.m. Aug. 10. This program will share lessons learned from previous situations and review current response concepts, emergency plans and techniques for prevention.

During the webinar, staff members will learn the latest techniques used by law enforcement, businesses and community agencies in preparing for active shooter emergencies. Click here to register. The deadline to register is August 7.

19 members of Congress testify on dangers of tariffs A 19-member bi-partisan group of lawmakers testified July 17 before the International Trade Commission (ITC) warning of the detrimental impacts of the recent tariffs on Canadian-imported newsprint.

Association, or by four of the five paper mills still producing newsprint in the United States. The ITC will reach a final determination in midSeptember.

There were no supporting witnesses for the North Pacific Paper Corp., the petitioner that sought to impose the tariffs. Canadian mills supply about three-fourths of the $1.2 billion in newsprint used each year for newspapers, newspaper supplements, certain books and directories and writing paper in the United States.

“We are grateful to the members of Congress who testified on this crucial issue,” said Ashley Wimberley, APA executive director. “This is a fight we cannot lose. We need to continue our efforts in Arkansas to explain to the public and our own congressional delegation the reasons why this tariff is danger to our industry and local economies.”

The tariffs were not requested by the primary trade group for U.S. paper manufacturers, the American Forest and Paper

Club – a listing of all member newspapers that have run every ad scheduled through APS this year with no errors. At the end of the year, APS will reward a newspapers still on the list for their staffs’ hard work and dedication to perfection.