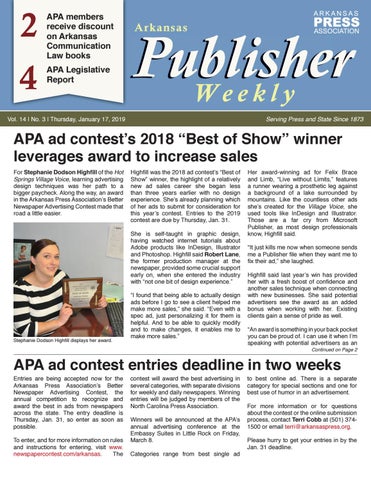 APA ad contest’s 2018 “Best of Show” winner leverages award to increase sales For Stephanie Dodson Highfill of the Hot Springs Village Voice, learning advertising design techniques was her path to a bigger paycheck. Along the way, an award in the Arkansas Press Association’s Better Newspaper Advertising Contest made that road a little easier.

Highfill was the 2018 ad contest’s “Best of Show” winner, the highlight of a relatively new ad sales career she began less than three years earlier with no design experience. She’s already planning which of her ads to submit for consideration for this year’s contest. Entries to the 2019 contest are due by Thursday, Jan. 31.

She is self-taught in graphic design, having watched internet tutorials about Adobe products like InDesign, Illustrator and Photoshop. Highfill said Robert Lane, the former production manager at the newspaper, provided some crucial support early on, when she entered the industry with “not one bit of design experience.”

“I found that being able to actually design ads before I go to see a client helped me make more sales,” she said. “Even with a spec ad, just personalizing it for them is helpful. And to be able to quickly modify and to make changes, it enables me to make more sales.”

Her award-winning ad for Felix Brace and Limb, “Live without Limits,” features a runner wearing a prosthetic leg against a background of a lake surrounded by mountains. Like the countless other ads she’s created for the Village Voice, she used tools like InDesign and Illustrator. Those are a far cry from Microsoft Publisher, as most design professionals know, Highfill said. “It just kills me now when someone sends me a Publisher file when they want me to fix their ad,” she laughed. Highfill said last year’s win has provided her with a fresh boost of confidence and another sales technique when connecting with new businesses. She said potential advertisers see the award as an added bonus when working with her. Existing clients gain a sense of pride as well. “An award is something in your back pocket you can be proud of. I can use it when I’m speaking with potential advertisers as an Continued on Page 2

Entries are being accepted now for the Arkansas Press Association’s Better Newspaper Advertising Contest, the annual competition to recognize and award the best in ads from newspapers across the state. The entry deadline is Thursday, Jan. 31, so enter as soon as possible.

To enter, and for more information on rules and instructions for entering, visit www. newspapercontest.com/arkansas. The

contest will award the best advertising in several categories, with separate divisions for weekly and daily newspapers. Winning entries will be judged by members of the North Carolina Press Association. Winners will be announced at the APA’s annual advertising conference at the Embassy Suites in Little Rock on Friday, March 8. Categories range from best single ad

to best online ad. There is a separate category for special sections and one for best use of humor in an advertisement. For more information or for questions about the contest or the online submission process, contact Terri Cobb at (501) 3741500 or email terri@arkansaspress.org. Please hurry to get your entries in by the Jan. 31 deadline.

Maxine Kemp, mother APA ad contest’s “Best of Show” winner of past APA president leverages award to increase sales Continued from Page 1 and grandmother added perk of working with me,” she said. The 2019 ad contest will be judged by of APA executive “You can say to your advertiser, ‘I worked members of the North Carolina Press director, passes away really hard and actually won an award for Association. Highfill said the judging Maxine Baker Kemp of Fayetteville, the mother of Arkansas Press Association Past President Ron Kemp and grandmother of APA Executive Director Ashley Wimberley, died Sunday, Jan. 13. She was 92.

Mrs. Kemp was a frequent guest at APA and National Newspaper Association conventions and a strong supporter of the newspaper industry. Ron Kemp was publisher of several Northeast Arkansas newspapers and a regional vice president for Rust Communications. Wimberley has worked for the APA for 13 years, and was named executive director last February. Mrs. Kemp was a retired educator who enrolled at what was then Ouachita Baptist College in Arkadelphia at age 16. She earned a bachelor’s degree in chemistry. At Ouachita, she met her husband, Cecil Kemp. After graduation, they began a career as public school educators in Searcy, Parkin, Arkadelphia, Mena, Dardanelle and Limon, Colorado. In 2005, Mrs. Kemp was named Citizen of the Year by the Dardanelle Area Chamber of Commerce in recognition of her dedicated work in the local school system, her church and the community. She was preceded in death by her husband and a brother, Gordon Maxwell Baker. Survivors include her son and daughter-inlaw, Ron and Nancy Kemp of Rector; her daughter and son-in-law, Kay and Charlie Rossetti of West Fork; four grandchildren; and eight great-grandchildren. Nelson-Berna Funeral Home of Fayetteville handled arrangements. A graveside service will be held at 1 p.m. Friday, Jan. 18, at Rockport Cemetery near Malvern. Memorials may be made to the River Valley Literacy Council, 501 North Front Street, Dardanelle, AR 72834, or the World Missions program at the West Fork Baptist Church, 246 North Centennial Ave., West Fork, AR 72774. Arkansas Publisher Weekly

this ad I designed for you,’ and that makes them feel good.”

Highfill encouraged other ad sellers and designers to participate in the 2019 contest. The competition is a way to evaluate what others are doing that works and to capitalize on trends in the industry, she said. “I get excited about this competition because I get to see what other people in this industry are creating and what is considered good ad art work these days,” she said. “The contest speaks to what the community responds to and what the consumer wants in ad design. If it’s not able to draw the attention of the consumer, it’s not working. Everyone is a consumer, even the judges.”

by out-of-state counterparts makes the contest more impactful and offers a “little bit more prestige” for the winners.

She’s looking forward to submitting this year’s entry, an ad created to support the Hot Springs Village Chamber of Commerce’s annual Business Expo. The expo’s theme was related to Star Wars, and Highfill incorporated that theme into her ad. Highfill has worked for the Village Voice since October 2015. She previously sold auto parts business-to-business in central Arkansas. A Cabot native, she graduated from Cabot High School and attended Arkansas State University-Beebe. She recently married David Highfill, and she and her family live in Lonsdale.

APA members receive discount on Arkansas Communication Law books The 10th edition of Mass Communication Law in Arkansas is now available to Arkansas Press Association members at a 25 percent discount when ordered directly from the publisher’s online bookstore, https://store.newforums.com/MassCommunication-Law-in-Arkansas-10thEdition-MLB03.html. To get the discount, use the coupon code MAR001. The total cost for one copy (shipping and handling included) is $34.55 and is payable by credit card or PayPal. The new edition provides an up-todate analysis of common legal issues faced by the media and other potential litigants, as well as information pertinent to avoiding lawsuits against reporters and editors. It includes specific Arkansas case descriptions in such areas as defamation, privacy invasion, media and the courts, freedom of information and other newsgathering issues. It also includes chapters concerning the Arkansas legal system, First Amendment theory, obscenity and commercial speech. This 226-page paperback will also be available to purchase at APA headquarters, 411 S. Victory St., in Little Rock. 2

“For years, Mass Communication Law in Arkansas has been the essential, goto resource for journalists, newsroom managers, publishers and students on the legal do’s and don’ts for newsgathering professionals,” said APA Executive Director Ashley Wimberley. “The authors explain in a straightforward and useful way how laws affect the reporting business and how reporters and organizations can protect themselves against lawsuits.” Mass Communication Law in Arkansas is the definitive book on Arkansas media law. It is co-authored by Bruce Plopper, a retired University of Arkansas at Little Rock journalism professor, and Stephen Ralph, a professor at the University of Central Arkansas. The 10th edition is the last edition to be co-authored by Plopper, who started the Arkansas version of the mass communications law book series that’s also published in other states. January 17, 2019

Camila Nadine (Bricker) Cox The author of a popular history and genealogy column for the Clay County Times-Democrat died Thursday, Jan. 3. Camilla Nadine (Bricker) Cox, of Piggott was 95. Formerly a linotype operator for the Piggott Times, she most recently wrote a weekly column in the Clay County TimesDemocrat on county history and the family lines of the people of Clay County. She was known as an expert resource on genealogy, which along with local history was her passion.

Reminder: FOIA Coalition meets January 29 to discuss bills Please register by next Friday January 25 for the next meeting of the Arkansas Freedom of Information Act Coalition. The coalition will meet Tuesday, Jan. 29 at noon at the Darragh Center of the Central Arkansas Library System Main Library at 100 South Rock Street in downtown Little Rock. The coalition has invited representatives of the Arkansas Municipal League to attend. The Municipal League is considering support of several proposals in the 2019

Arkansas legislative session that could impact, or even weaken, the state’s open meetings and open records law. One bill would exempt certain documents, or “working papers” of government attorneys from disclosure during active litigation. Another possible proposal calls for all existing exemptions to the FOIA to be specifically codified within the Act. Municipal League Executive Director Mark Hayes has been invited to discuss the proposals with the coalition.

She helped to found the Clay County Genealogical and Historical Society and wrote and edited their newsletter for years. She also published the 188-page book, “Index to Clay County, Arkansas Cemeteries”. In recent years much of her research was donated to the Piggott Library. Cox attended college in Batesville at what is now Lyon College, and she was brieﬂy a school teacher. After working as a linotype operator, she worked as the bookkeeper at Cox Lumber Company in Piggott until retirement. An active member of the First Baptist Church of Piggott, she had been a Sunday School teacher and was church clerk for more than 40 years. Cox was the widow of Dorris Edward Cox. They had three children, Alan Dale Cox; Judy Catherine Phillips, and Carol Ann Cox. She is also survived by two grandchildren and two sisters. Her funeral was held Sunday, Jan. 6. She is buried in Piggott Cemetery.

Let Us Know We want to know about your new hires, retires and promotions! Send your staffing changes to info@ arkansaspress.org to be updated online and included in the Arkansas Publisher Weekly.

Awaits initial hearing in House Education Committee (Rep. Gazaway has indicated he is re-ﬁling the bill and withdrawing the executive session provision)