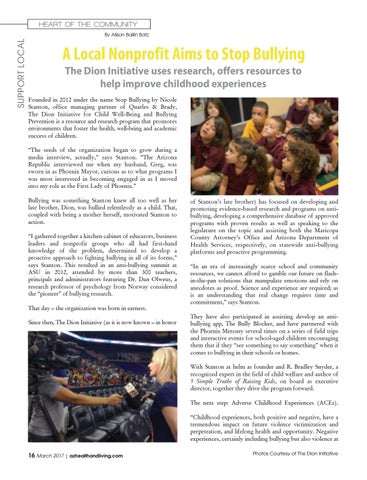 HEART OF THE COMMUNITY

Founded in 2012 under the name Stop Bullying by Nicole Stanton, office managing partner of Quarles & Brady, The Dion Initiative for Child Well-Being and Bullying Prevention is a resource and research program that promotes environments that foster the health, well-being and academic success of children. “The seeds of the organization began to grow during a media interview, actually,” says Stanton. “The Arizona Republic interviewed me when my husband, Greg, was sworn in as Phoenix Mayor, curious as to what programs I was most interested in becoming engaged in as I moved into my role as the First Lady of Phoenix.” Bullying was something Stanton knew all too well as her late brother, Dion, was bullied relentlessly as a child. That, coupled with being a mother herself, motivated Stanton to action. “I gathered together a kitchen cabinet of educators, business leaders and nonprofit groups who all had first-hand knowledge of the problem, determined to develop a proactive approach to fighting bullying in all of its forms,” says Stanton. This resulted in an anti-bullying summit at ASU in 2012, attended by more than 300 teachers, principals and administrators featuring Dr. Dan Olweus, a research professor of psychology from Norway considered the “pioneer” of bullying research. That day – the organization was born in earnest. Since then, The Dion Initiative (as it is now known – in honor

of Stanton’s late brother) has focused on developing and promoting evidence-based research and programs on antibullying, developing a comprehensive database of approved programs with proven results as well as speaking to the legislature on the topic and assisting both the Maricopa County Attorney’s Office and Arizona Department of Health Services, respectively, on statewide anti-bullying platforms and proactive programming. “In an era of increasingly scarce school and community resources, we cannot afford to gamble our future on flashin-the-pan solutions that manipulate emotions and rely on anecdotes as proof. Science and experience are required; as is an understanding that real change requires time and commitment,” says Stanton. They have also participated in assisting develop an antibullying app, The Bully Blocker, and have partnered with the Phoenix Mercury several times on a series of field trips and interactive events for school-aged children encouraging them that if they “see something to say something” when it comes to bullying in their schools or homes. With Stanton at helm as founder and R. Bradley Snyder, a recognized expert in the field of child welfare and author of 5 Simple Truths of Raising Kids, on board as executive director, together they drive the program forward. The next step: Adverse Childhood Experiences (ACEs). “Childhood experiences, both positive and negative, have a tremendous impact on future violence victimization and perpetration, and lifelong health and opportunity. Negative experiences, certainly including bullying but also violence at

Photos Courtesy of The Dion Initiative 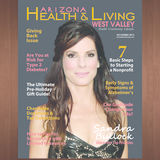