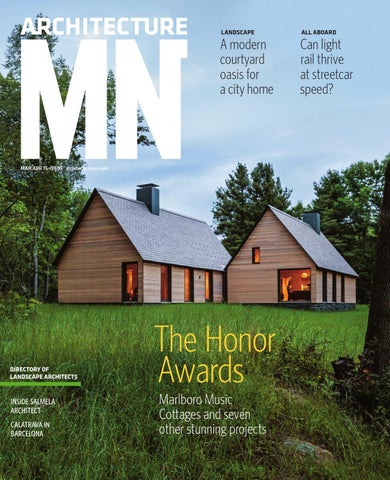 A modern courtyard oasis for a city home

INSIDE SALMELA ARCHITECT CALATRAVA IN BARCELONA

Architecture MN is a publication of The American Institute of Architects Minnesota architecturemn.com

Architecture MN, the primary public outreach tool of the American Institute of Architects Minnesota, is published to inform the public about architecture designed by AIA Minnesota members and to communicate the spirit and value of quality architecture to both the public and the membership.

We roll out the red carpet for the eight winners of the top architecture award in the Upper Midwest.

ON THE COVER Marlboro Music Cottages Marlboro, Vermont “The five cottages, sited in the wooded rolling hills along Musician’s Way, harmonized like the notes of a musical chord, combining and recombining as I walked around them,” says photographer Paul Crosby. “Soft sounds of a violin emanated from one of them— the perfect complement.”

“ In one of Chicago’s edgier neighborhoods, behind the facade of a new residence built into a row of old brownstones, lies an oasis of calm,” writes Joel Hoekstra. “The lush vegetation and sculpted landscape of a secluded courtyard give the homeowner a place to escape the twitch and tempo of the city. It’s the kind of retreat most city dwellers can only dream of.”

SCREEN CAPTURE A new film short takes a cinematic look at what architects do and why they do it. Plus: our next Instagram contest. CULTURE CRAWL ­ BY ANGIE MCKINLEY The architect of the National World War II Museum in New Orleans visits the Twin Cities to talk war and peace.

STUDIO David Salmela’s design influences are visible everywhere in his Duluth home studio. CONUNDRA BY FRANK EDGERTON MARTIN Metro Transit’s new Green Line has the speed and rhythm of a sleek streetcar line. Might that be a good thing? WAYFARER BY PAUL CROSBY A Minneapolis photographer returns from Barcelona with a breath-taking image of a towering Olympic landmark.

PHOTOGRAPH BY CHAD HOLDER Walker Art Center senior curator Andrew Blauvelt talks about the past and the present of his favorite Walker gallery.

We at Architecture MN are about to turn a significant page in our history: At the end of April, longtime AIA Minnesota executive vice president and Architecture MN publisher Beverly Hauschild-Baron, Hon. AIA, will retire. The occasion is a melancholy one for us, but it also fills us with an immense amount of gratitude for all that Beverly has helped accomplish for the magazine.

In the past decade—my tenure as editor— Beverly has championed, among other efforts, a complete redesign of the magazine, the launch of architecturemn.com, and the development of our popular Videotect competition (the photo above shows her at one of the Walker Art Center screening events). Videotect was our gateway to organizing other design-themed events, such as our tour of the Surly MSP brewery in January. Today, the magazine is something you can read and do. Redesigns and packed-house screening events are a lot of fun; economic downturns are not. I’m especially thankful to our publisher for steering us through the Great Recession, making us lean while still giving us the tools we needed

to produce an award-winning magazine. That commitment to our long-term success is the reason why our relatively small operation is able to reach out to readers in all of the ways that larger magazines do—in print, online, on social media, and in person. But as much as we’re going to miss Beverly the publisher, we’re going to miss Beverly the sounding board even more. On a number of occasions over the past 10 years, I’ve walked into her office with an editorial decision I wasn’t fully committed to—a cover choice, for example. The conversation always shed more light on the virtues and value of each option. Beverly usually had a strong opinion, but her parting words were always: “It’s your call.”

We’ve always appreciated that balance of, on the one hand, intellectual engagement with the making of the magazine and, on the other, complete trust in the staff. We hope to repay that trust for years to come. What we’ve learned from our publisher—what we’ll carry forward into our next chapter—is to pursue the highest standards in everything we do.

AREA OF SPECIALTY: Design focusing on context, scale, and culture. THE VIEW FROM YOUR DESK: Lake Superior and the harbor, including the Aerial Lift Bridge and Park Point. And wildlife on occasion. FAVORITE DULUTH CAFES AND RESTAURANTS: New Scenic Cafe, Lake Avenue Cafe, and Duluth Grill. OUTSIDE INTEREST: Skiing. RECENT VOLUNTEER GIG: Helped to protect a park building from demolition. WHERE WOULD YOU FLY STAFF FOR INSPIRATION IF YOU HAD THE BUDGET FOR IT? Jyväskylä, Finland—home to many Alvar Aalto structures. THREE BUILDINGS TRAVELERS SHOULD SEE IN FINLAND: Villa Mairea, Säynätsalo Town Hall, and Muuratsalo Experimental House, all by Aalto. BEST COMPLIMENT YOU’VE RECEIVED: Clients of 25 years still want to get together. PAST PROJECTS THAT TAUGHT YOU THE MOST: Izzy’s Ice Cream Factory and Fast Horse advertising headquarters, two highly contextual urban projects completed on tight budgets. FARTHEST-FLUNG PROJECT: A house in Moscow. YOUR ARCHITECTURAL HEROES: Aalto, Le Corbusier, Álvaro Siza, and Peter Zumthor. BIGGEST MISCONCEPTION ABOUT ARCHITECTURE: That it’s a luxury, not a necessity. HOW IS YOUR FIRM CHANGING? We have virtual offices. DREAM PROJECT: Every project is someone’s dream project.

The home studio of Duluth architect David Salmela, FAIA, is filled with natural light and ideas

The living areasâ&amp;#x20AC;&amp;#x2122; hard surfaces, along with the volume created by the cathedral ceilings, provide the reverberant qualities needed for the playing of music.

The cottages, arranged along a former logging road, stand in clearings in the forest. The buildings have a spare quality that recalls the simple, gabled forms of traditional Capes.

BY THOMAS FISHER, ASSOC. AIA Goethe called architecture “frozen music,” but the AIA Minnesota Honor Award–winning Marlboro Music Cottages also show how much music can “thaw” architecture. Designed by Joan Soranno, FAIA, with John Cook, FAIA, and Doug Gerlach, AIA, of HGA Architects and Engineers, the five houses have a warm, inviting quality in keeping with the classical music emanating from them. They’re home to the musicians and their families who attend the world-famous Marlboro Music Festival each summer in Vermont. Standing along a former logging road near Marlboro College, the gable-roofed residences recall the region’s Cape Cod houses, which Soranno, who grew up in Boston, knows well. “The typical Cape,” she says, “has a 60/40 roof-to-wall relationship, a center chimney, and windows up against seven-foot-high eaves. We adhered to those intimate proportions while trying to reinterpret Capes in a fresh way.” In this, they have succeeded—brilliantly. Like the musicians of Marlboro Music with their fresh interpretations of the classical repertoire, Soranno and Cook have made a 400-year-old form feel new and alive with possibility. They did so, in part, by recalling the spare quality of the first Capes, with their local materials and unpainted surfaces. The Marlboro cottages have naturally stained wood exteriors and unpainted interiors, with Vermont slate roofs and floors, local-stone foundation veneers, and native whitepine walls and ceilings. “The client wanted minimal maintenance,” says Cook, “so we used long-lasting materials and finishes.”

“This project is the kind that makes other architects jealous. You just wish that you could have had an opportunity to do something this good, because it’s so beautifully executed.”

The Toro Company built its reputation on innovation in turf care and landscaping. Since 1952, the company’s research and development facility in Bloomington, Minnesota, has doubled as a corporate headquarters and office. But as the $2.2 billion company grew, its sprawling, one-story postwar campus no longer met corporate needs. In particular, space for R&amp;D

was getting squeezed—not the ideal situation for a technology-driven company that competes internationally. It was time for the engineers to reclaim their turf.

“It was very much about creating a building that was going to tie in with our existing campus but still be unique,” says Heather Hille, director, corporate counsel, for Toro.

Toro decided on a dedicated office building, which would free up space for product development labs in the existing facility while providing additional

meeting and training areas. The company chose the Minneapolis office of Leo A Daly to design the three-level, 75,000-square-foot structure.

“This is a very challenging building type because of its size, but the architects here used a combination of materials to break down the mass of the building and reflect the beautiful landscape around it. It’s one of the most effective uses of highly reflective glass I’ve seen.”

URBAN SANCTUARY A COURTYARD BY COEN + PARTNERS PROVIDES A CHICAGO HOMEOWNER WITH A SEAMLESS INDOOR/OUTDOOR LIVING SPACE In a city as dense as Chicago, privacy and serenity BY JOEL HOEKSTRA

are often hard to come by. But in one of the city’s edgier neighborhoods, behind the facade of a new residence built into a row of old brownstones, lies an oasis of calm. The lush vegetation and sculpted landscape of a secluded courtyard give the homeowner a place to escape the twitch and tempo of the city. It’s the kind of retreat most city dwellers can only dream of. This bucolic bubble is the work of Minneapolis landscape architecture firm Coen + Partners, which partnered with Chicago architecture firm Brininstool + Lynch to shape the indoor/outdoor living space. Collaborating right from the start of the project, the two firms fulfilled their client’s wish for an urban sanctuary that blended interior and exterior spaces into one living environment. “You can’t talk about the house without talking about the landscape, and vice versa,” says Shane Coen. “It’s clear that they were designed in tandem.” That sense of unity is achieved partly through transparency. The L-shaped, three-story home features floor-to-ceiling glass on two sides of 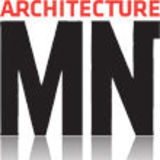