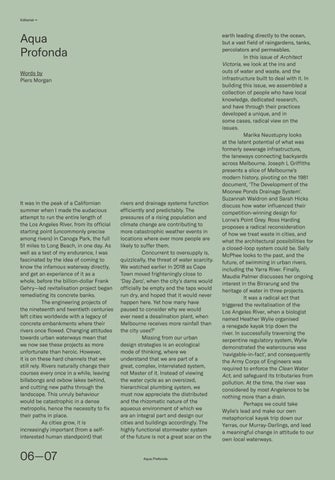 It was in the peak of a Californian summer when I made the audacious attempt to run the entire length of the Los Angeles River, from its official starting point (uncommonly precise among rivers) in Canoga Park, the full 51 miles to Long Beach, in one day. As well as a test of my endurance, I was fascinated by the idea of coming to know the infamous waterway directly, and get an experience of it as a whole, before the billion-dollar Frank Gehry—led revitalisation project began remediating its concrete banks. The engineering projects of the nineteenth and twentieth centuries left cities worldwide with a legacy of concrete embankments where their rivers once flowed. Changing attitudes towards urban waterways mean that we now see these projects as more unfortunate than heroic. However, it is on these hard channels that we still rely. Rivers naturally change their courses every once in a while, leaving billabongs and oxbow lakes behind, and cutting new paths through the landscape. This unruly behaviour would be catastrophic in a dense metropolis, hence the necessity to fix their paths in place. As cities grow, it is increasingly important (from a selfinterested human standpoint) that

rivers and drainage systems function efficiently and predictably. The pressures of a rising population and climate change are contributing to more catastrophic weather events in locations where ever more people are likely to suffer them. Concurrent to oversupply is, quizzically, the threat of water scarcity. We watched earlier in 2018 as Cape Town moved frighteningly close to ‘Day Zero’, when the city’s dams would officially be empty and the taps would run dry, and hoped that it would never happen here. Yet how many have paused to consider why we would ever need a desalination plant, when Melbourne receives more rainfall than the city uses?1 Missing from our urban design strategies is an ecological mode of thinking, where we understand that we are part of a great, complex, interrelated system, not Master of it. Instead of viewing the water cycle as an oversized, hierarchical plumbing system, we must now appreciate the distributed and the rhizomatic nature of the aqueous environment of which we are an integral part and design our cities and buildings accordingly. The highly functional stormwater system of the future is not a great scar on the

earth leading directly to the ocean, but a vast field of raingardens, tanks, percolators and permeables. In this issue of Architect Victoria, we look at the ins and outs of water and waste, and the infrastructure built to deal with it. In building this issue, we assembled a collection of people who have local knowledge, dedicated research, and have through their practices developed a unique, and in some cases, radical view on the issues. Marika Neustupny looks at the latent potential of what was formerly sewerage infrastructure, the laneways connecting backyards across Melbourne. Joseph L Griffiths presents a slice of Melbourne’s modern history, pivoting on the 1981 document, ‘The Development of the Moonee Ponds Drainage System’. Suzannah Waldron and Sarah Hicks discuss how water influenced their competition-winning design for Lorne’s Point Grey. Ross Harding proposes a radical reconsideration of how we treat waste in cities, and what the architectural possibilities for a closed-loop system could be. Sally McPhee looks to the past, and the future, of swimming in urban rivers, including the Yarra River. Finally, Maudie Palmer discusses her ongoing interest in the Birrarung and the heritage of water in three projects. It was a radical act that triggered the revitalisation of the Los Angeles River, when a biologist named Heather Wylie organised a renegade kayak trip down the river. In successfully traversing the serpentine regulatory system, Wylie demonstrated the watercourse was ‘navigable-in-fact’, and consequently the Army Corps of Engineers was required to enforce the Clean Water Act, and safeguard its tributaries from pollution. At the time, the river was considered by most Angelenos to be nothing more than a drain. Perhaps we could take Wylie’s lead and make our own metaphorical kayak trip down our Yarras, our Murray-Darlings, and lead a meaningful change in attitude to our own local waterways. 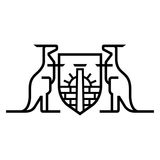