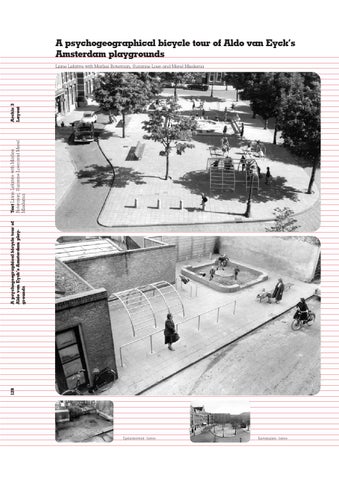 a supermarket, on Lindenstraat a house. In the Frankendaal neighbourhood, now the baby boom is past, at least one playground has been turned into a rose garden. To our amazement, however, the Bertelmanplein playground, the first, has survived almost unchanged. This bicycle tour is tourism with a difference. It is psychogeographical tourism. The map contains nothing highfalutin – no stately mansions, no grand facades, no luxurious interiors along well-ordered canals. This is a dérive, an erratic trip past a few of the myriad points where the deep collective memory of a city intersects with the childhood memories of every individual inhabitant. These are points where the seeds of community were sown, where the city is not simply to be looked at or consumed, but to be lived.

The first playground Aldo van Eyck designed was for the Bertelmanplein, in 1947. Jacoba Mulder, who worked under Cor van Eesteren at the Department of Urban Development, had noticed that the children in her neighbourhood had nowhere to play. She gave the design job to one of her assistants, the 26-year-old Aldo van Eyck. A month or so after its completion, a woman living a few blocks away saw the new playground and wrote to the Public Works department requesting one for her area. From that moment on, they spread like wildfire, first through the historical centre, then, in the course of the 1950s, to the new districts to the west of the city. Every city has playgrounds. So what makes these unique? One reason is their scale. They are conceived not on the scale of the neighbourhood or even of the block, but on that of the leftover, interstitial spaces of a densely populated city. They appeared not only in idyllic parks, like Frederik Hendrik Plantsoen and Vondel Park, but also in between new housing blocks in Frankendaal and along Buskenblasersstraat. You came across them in dead-end streets, like the Gordijnensteeg, and on derelict sites previously used as garbage dumps as in the case of the Laagte Kadijk, Rapenburg and Lauriergracht. They took the place of a few parking spots, as in Anjelierstraat, or they appeared in the middle of busy traffic intersections in the city centre like Hogendorplein or Van Boetselaerstraat. Another thing that makes them special is that at the time that he designed them Aldo van Eyck was more inspired by artists – the COBRA group in particular (Constant, Corneille, Appel, Schwitters) but also Mondrian and van Doesburg – than by architects. The playgrounds are extremely simple, devoid of frills, and they make use of their surroundings. They can be regarded as site-specific sculptures and as such inspired by Kurt Schwitters. Their aesthetic is that of the found object and thus quite unlike the postwar sculptures by the likes of Pevsner, Picasso and Zadkine that found a place in Rotterdam. The playgrounds also differed from this kind of artwork in that they were designed as part of a polycentric network, conceived as a sort of second city – playful, continually changing and changeable – that was superimposed as it were upon the functional, workaday city. From this point of view, the playgrounds by the ‘humanist rebel’ Aldo van Eyck are realistic forerunners of more utopian projects, like Ralph Rumney’s ludic Psychogeographies of Venice and Paris, Guy Debord’s Situationist dérives of Paris and Constant’s Urbanisme Unitiare and his visions for Amsterdam in the New Babylon project. Also notable is their number. They are literally uncountable. How many Aldo van Eyck himself designed is hard to tell. In the strictest sense – designed by his own hand – perhaps 300. But in the broadest sense – based on his design principles and built by the municipality – many times that. They have spread beyond Amsterdam, to just about every town in the Netherlands and there seems to be no end to Aldo van Eyck playgrounds in sight. What has happened to Van Eyck’s own playgrounds? Do they still exist? It’s a question that crops up regularly. Sponsored by the Design Knowledge Systems Group of TU Delft, we have begun a ‘post-occupancy’ study. One result is this bicycle tour. It gives a representative sampling of the fate of the playgrounds. Some are still in good condition, like those in Frederik Hendrikplantsoen and Vondel Park, which is hardly surprising given their high profile. Some have reverted to wasteland, like the one on Palmgracht. The Zeedijk playground is now a Chinese Buddhist Temple; in the Gordijnensteeg, instead of a sand pit there is now a whorehouse. In Eerste Jan Steenstraat is

(unchanged but with a couple of tacky new addtions) (replaced by houses) (unchanged) (unchanged) (completely built-over) (Chinese temple) (whorehouse) (unchanged and still beautiful with the chestnut trees) (completely new playground, one of the few left in the Jordaan where there were once so many) (now an intersection) (three fine, unchanged specimens) (cheerless square, furniture gone) (unchanged, but a bit sad) (a mish mash of new and old) (a sign saying ‘playground’, but no playground in sight) (replaced by a house) (a new playground has completely obliterated the Van Eyck original) (gone) (new house) (still there but with new additions) (gone) (still a playground) (back to square one)

134 Proliferation of playgrounds around 1976

Aldo van Eyck's playgrounds are famous in Amsterdam. He turned 'leftover' spaces into extremely simple, yet inspiring playgrounds for children. We visited these places in a psychogeographical bicycle tour. 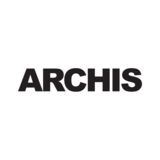