IN THE NAME OF ALLAH 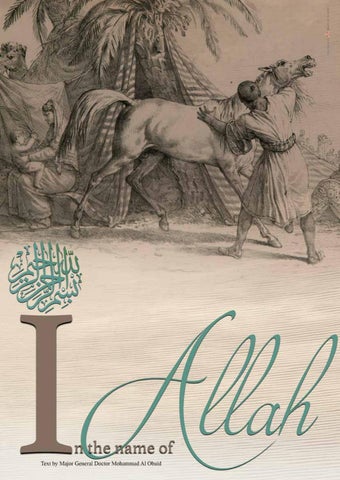 hen western explorers first came to ARABIA more than two centuries ago, they discovered how the ARAB people dealt with their horses and learned that their treatment of their horses, DESERT ARABIAN HORSES, was unique in all the earth. The ARAB nation may be the only nation in existence that preserved and protected the purity of their ARABIAN HORSEâ&amp;#x20AC;&amp;#x2122;s blood by keeping it separate from any foreign blood.

fter the introduction of motorized vehicles, guns, and other weapons, the ARAB people were not in need of their horses as before. But ALLAH sent the Egyptian governor, ABBAS PASHA, to keep and preserve the purity of these noble horses. ABBAS PASHA sent a group of experts to collect the best horses from the ARABIAN PENINSULA and bring them to him in Egypt. It was perhaps the first and most significant migration of ARABIAN HORSES

to Egypt. This was the beginning of a new era for the ARAB HORSE. Later, additional horses, mares and stallions, came again from the same root, that is the ARABIAN PENINSULA, and these were also entered into the breeding programs in Egypt. The gift of five mares, presented by KING BIN SAUD to EGYPTIAN KING FOUAD, was another important example of how DESERT blood was introduced and established the EGYPTIAN ARABIAN breed.

Not only did the EGYPTIANS gather a collection of DESERT ARABIAN HORSES, pure in blood, and of the highest quality, they bred them in a manner that greatly improved on these horses and their progeny. The EGYPTIANS produced very beautiful and correct horses with good conformation. With the bloodstock gathered from the original root, the ARABIAN PENINSULA, entered into their breeding program, EGYPTIANS made huge and significant improvements to their horses and to all the ARABIAN HORSES of the world.

For example, we find the legendary EGYPTIAN sire MORAFIC was a result of the desert bred stallion EL DEREE from the AL JUBOR TRIBE in the north of ARABIA. Also, we can see the name of the great stallion KHEIR in many pedigrees of very famous horses of today. KHEIR was a descendant of the DESERT BRED mare A SAQLAWIYAH SHEYFIYAH through his dam, BADAOUIA, who was presented by SHARIF ALI of MECCA. Another great EGYPTIAN mare, HANAN, made many changes and contributed significant improvements to the whole breed of STRAIGHT EGYPTIANS. She traces back in her tail female line to the DESERT mare EL OBEYA OM GREES who was presented by the KING OF ARABIA.

The super champion STRAIGHT EGYPTIAN stallion AL LAHAB is also a result from a DESERT mare through his sire Laheeb’s third maternal grandsire’s dam, EXOCHORDA, from the AL DAMER FAMILY of the AL EJMAAN TRIBE from the eastern region of ARABIA. This lineage is found in many great horses of STRAIGHT EGYPTIAN breeding such as RUMINAJA ALI, ALI DAAR, and others. In the late 1990s, there was a gathering at the NAJD ARABIAN STUD in RIYADH, SAUDI ARABIA. Present at the event was the owner of the stud, His Royal Highness, PRINCE TURKI BIN FAHAD AL SAUD, as well as MRS. JUDITH FORBIS, owner of the ANSATA STUD, and other Princes and ARABIAN HORSE breeders from all over the world. There was a presentation of some great DESERT mares including some of very rare strains. MRS. FORBIS said if she could have some mares, she would include them in her ANSATA STUD breeding program. She mentioned two mares in particular; BINT AZIZA, a beautiful grey HAMDANI SEMREYYAH mare, and RASHEEDA, a bay KUHALAH KRUSH mare.

On another occasion, the Manager of Al RAYYAN STUD, breeders of STRAIGHT EGYPTIAN HORSES, asked me to request of NAJD ARABIAN STUD to have one of their mares, the beautiful HAMDANYYAH SEMREYYAH mare NAJLA, to include in their program. The acknowledgement of the importance of these horses by such highly-respected experts, and their desire to add them to their world-famous breeding programs, indicates the value of the NOBLE DESERT HORSESâ&amp;#x20AC;&amp;#x2122; purity and their historic influence on STRAIGHT EGYPTIAN horses. SOTAMM 1910

If we look at the photos of the old EGYPTIAN horses, such as the great stallion SOTAMM 1910, Astreled x Selma, and compare them with the STRAIGHT EGYPTIAN horses of today, we can see they look different. However, we can also see some similarities between the DESERT HORSES and the newer EGYPTIAN horses. Also, we find the DESERT stallion MASHANN, who was presented by the Ambassador of KING ABDULAZIZ BIN SAUD to Egyptâ&amp;#x20AC;&amp;#x2122;s FAWZAN AL SABIG, appears in many pedigrees of recent and current great champions. They are true examples of DESERT horses and their lasting influence. MASHANN

ecently at AL LEWA ARABIAN STUD, of Riyadh, Saudi Arabia, a breeder dedicated exclusively to EGYPTIAN HORSES for more than 28 years, made the important decision to include DESERT blood again into the program. We obtained KEHAILAT HADDAJ, a HAMDANYAH SEMRWYYAH mare of the BINT AZIZA family. In 2015, KEHAILAT HADDAJ was mated with the beautiful STRAIGHT EGYPTIAN SAQLAWI stallion MASHALLAH AL QUSAR. In 2016, she gave us a very beautiful mare we named HAMDANYIAH AL LEWA. Also, in the next season, the same mating was repeated and KEHAILAT HADDAJ gave us another beautiful mare, JAZERYAH AL LEWA. This special young mare was selected by AL SAFINAT STUD, in KUWAIT, another breeder of STRAIGHT EGYPTIAN horses. I wish them well with their new breeding program. Last year, KEHAILAT HADDAJ was mated with a STRAIGHT EGYPTIAN DAHMAN SHAHWAN stallion and in 2020, she gave us a completely different type of horse. This result proves once again that the mysteries of ARABIAN HORSE breeding are ETERNAL and are known only to ALLAH, the most GRACIOUS, and the most MERCIFUL.

IN THE NAME OF ALLAH

Text by Major General Doctor Mohammad Al Obaid When western explorers first came to ARABIA more than two centuries ago, they discovered how the ARAB people dealt with their horses and learned that their treatment of their horses, DESERT ARABIAN HORSES, was unique in all the earth. The ARAB nation may be the only nation in existence that preserved and protected the purity of their ARABIAN HORSE’s blood by keeping it separate from any foreign blood. 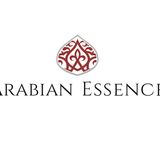