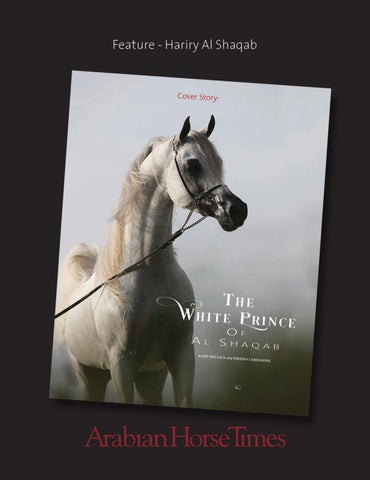 The WhiTe Prince A

by JEFF WALLACE with THERESA CARDAMONE

l Shaqab has been breeding the worldâ&amp;#x20AC;&amp;#x2122;s finest Arabian horses for long enough to have created a dynasty. The Al Shaqab name is synonymous not only with excellence, but also with the expectation that the newest generation will somehow eclipse the near perfection of their forefathers. When Hariry Al Shaqab was foaled at Al Shaqab in 2010, he was the physical representation of a pedigree that boasts 15 national champions. As if a master-painter had utilized just the right amount of each colorful bloodline, he emerged as a masterpiece of the Al Shaqab program. Hariry Al Shaqab is statuesque, with a dynamic presence that is awe-inspiring. His elegant topline, regal carriage, and chiseled head are the perfect accent for his latent masculinity. His extravagant front end takes the breath

away. Hariry combines his perfection of form with a powerful athleticism that makes him the most complete stallion available. With attributes anchored in every line of his pedigree, Hariry Al Shaqab has staked his claim as the unique progenitor of the grey gene of his sire, Marwan Al Shaqab. World Champion and twice-U.S. National Champion Stallion among many other titles, Marwan Al Shaqab has proven to be a sire of great sires. He consistently raises the quality level of his offspring way up, even as he lets the strengths of the mares play through. Prior to Hariry, Marwan sired world champion full brothers Kahil Al Shaqab and Wadee Al Shaqab, both progenitors of the bay look of Marwanâ&amp;#x20AC;&amp;#x201D;Polish and American breeding with a Nazeer sire line. There are many other champion

sons and daughters to validate Marwan’s credentials as the most influential sire of current times, some would say, the “Sire of the Century.” Through the contributions of his international champion dam White Silkk, Hariry takes that potent formula one step further. “Hariry Al Shaqab is unique among all of the Al Shaqab stallions,” says Al Shaqab Breeding and Show Manager, Mohammed Al Sulaiti. “Most horses are the sum of their parents, their inherited characteristics are immediately identifiable and attributable to their mother or father,” he continued. “But not Hariry. Hariry is one of those truly rare horses that equates to greater than the sum of his parents. Hariry has inherited the very best conformation of his entire pedigree, a pedigree that comprises many of the breed’s most highly accomplished breeding and show horses.”

Honors and titles are certainly a measure of success, but it is in producing the next generation that a stallion’s mettle is taken. Hariry’s first foals show exceptional promise. Knowledgeable breeders from around the globe have chosen Hariry to elevate their programs, and he has not disappointed. One example is Oak Ridge Arabians’ exquisite grey filly Wieza Magia, out of Poland’s Wieza Mocy, arguably the most popular and successful Arabian show mare alive today. Recently, Hendrik Mens welcomed a grey Hariry Al Shaqab filly to the herd at Al Nasser Stud in Qatar. Out of the magnificent producer Ftoon Al Shaqab, the new filly is a maternal half-sister to the popular stallion Kanz Al Nasser.

The list of breeders investing in Hariry’s potential reads like a Who’s Who and includes Sheila Varian, who brings decades of wisdom into her choices. Her Hariry filly Siri V has two additional lines Indeed, in Hariry Al Shaqab to Ruminaja Ali through the finest elements of every her dam Santa Barbara line of his pedigree are Juell V, a descendant represented in a harmonious from the strong dam blend that could be the line of the black Bask most pre-potent source of daughter, Spinning perfection the world has yet Song. Steve and Darla seen. From the silver grace of Miles have welcomed a Sonoma Lady (1985) and to 2015 colt, (Hariry Al shaqab x Cleopatra Al Shaqab). dynamic son of Hariry the power of Kajora (1982), to their collection at Milestone Arabians. The young to the haunting eyes and elegance of Ali Jamaal (1990) prince is out of Legacys Treasure, herself a daughter of and the balance of Aladdinn (1979), Hariry Al Shaqab Legacy of Fame, with crosses to Padron and El Shaklan. takes exactly what he needs from each of his ancestors and polishes that element until it is uniquely his. He follows his sire Marwan Al Shaqab, grandsires Gazal Al Shaqab and As Hariry’s foals begin to compete in show rings around the Dakar El Jamaal, and great-grandsire Echo Magnifficoo world, they will have a lot to live up to. Hariry Al Shaqab’s as a U.S. National Champion or Reserve. A generation splendid pedigree equates to one thing in terms of trial by further back, top ten stallion El Hilal is indicative of the competition. Undefeated. That sums up Hariry Al Shaqab’s high quality that infuses his pedigree. With seven Canadian meteoric show career in a single word. Not only undefeated, National titles, ten U.S. National champion titles and eight Hariry hasn’t lost in three years of tough competition against U.S. National reserves represented in his blood, Hariry Al the finest horses on the planet, for the most prestigious titles Shaqab is a super-concentrated source of excellence for offered around the world. On each and every occasion, he many of the world’s finest mares. has proudly borne the banner of Al Shaqab to victory.

show rings in America, Hariry took Europe by storm, emerging the 2015 Menton Gold Champion Stallion, again by unanimous vote of the judges, this time with his European escort, talented Italian trainer Giacomo Capacci, handling. Hariry Al Shaqabâ&amp;#x20AC;&amp;#x2122;s passport has Paris written all over it, and there is no one who would begrudge him his claim to the title of World Champion. As the pages of the calendar turn swiftly to the end of the year, the eyes of the Arabian public will be firmly fastened on the spotlights of Paris. There, they will flock to see Hariry Al Shaqab explode into the arena, demanding the complete attention of all who are there to witness his domination. As ever, he will captivate the crowd with his fire, his grace, and his pure perfection. When the spotlights dim, Hariry Al Shaqab will leave the ring as his relations did before him, the Champion of the World. â&amp;#x2013;