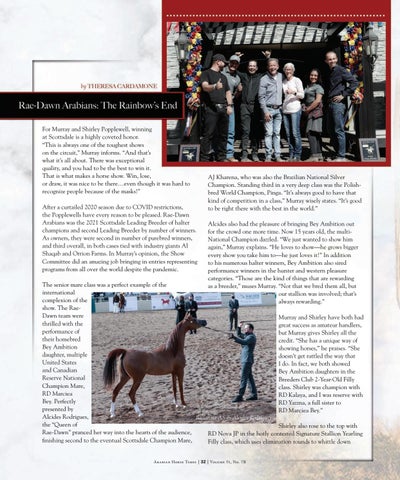 For Murray and Shirley Popplewell, winning at Scottsdale is a highly coveted honor. “This is always one of the toughest shows on the circuit,” Murray informs. “And that’s what it’s all about. There was exceptional quality, and you had to be the best to win it. That is what makes a horse show. Win, lose, or draw, it was nice to be there…even though it was hard to recognize people because of the masks!” After a curtailed 2020 season due to COVID restrictions, the Popplewells have every reason to be pleased. Rae-Dawn Arabians was the 2021 Scottsdale Leading Breeder of halter champions and second Leading Breeder by number of winners. As owners, they were second in number of purebred winners, and third overall, in both cases tied with industry giants Al Shaqab and Orrion Farms. In Murray’s opinion, the Show Committee did an amazing job bringing in entries representing programs from all over the world despite the pandemic.

AJ Kharena, who was also the Brazilian National Silver Champion. Standing third in a very deep class was the Polishbred World Champion, Pinga. “It’s always good to have that kind of competition in a class,” Murray wisely states. “It’s good to be right there with the best in the world.” Alcides also had the pleasure of bringing Bey Ambition out for the crowd one more time. Now 15 years old, the multiNational Champion dazzled. “We just wanted to show him again,” Murray explains. “He loves to show—he grows bigger every show you take him to—he just loves it!” In addition to his numerous halter winners, Bey Ambition also sired performance winners in the hunter and western pleasure categories. “Those are the kind of things that are rewarding as a breeder,” muses Murray. “Not that we bred them all, but our stallion was involved; that’s always rewarding.”

The senior mare class was a perfect example of the international complexion of the show. The RaeDawn team were Murray and Shirley have both had thrilled with the great success as amateur handlers, performance of but Murray gives Shirley all the their homebred credit. “She has a unique way of Bey Ambition showing horses,” he praises. “She daughter, multiple doesn’t get rattled the way that United States I do. In fact, we both showed and Canadian Bey Ambition daughters in the Reserve National Breeders Club 2-Year-Old Filly Champion Mare, class. Shirley was champion with RD Marciea RD Kalaya, and I was reserve with Bey. Perfectly RD Yazzna, a full sister to presented by RD Marciea Bey.” Alcides Rodrigues, Bailarina AS &amp; Alcides Rodrigues the “Queen of Shirley also rose to the top with Rae-Dawn” pranced her way into the hearts of the audience, RD Nova JP in the hotly contested Signature Stallion Yearling finishing second to the eventual Scottsdale Champion Mare, Filly class, which uses elimination rounds to whittle down Ar abian Horse Times | 32 | Volume 51, No. 7 B