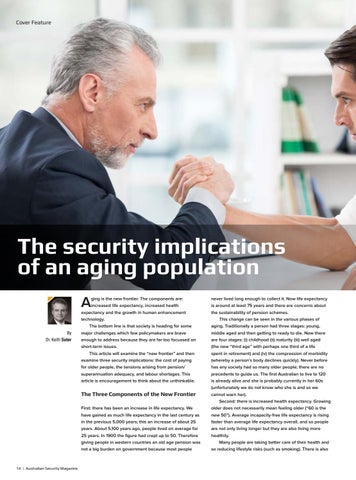 The security implications of an aging population A By Dr. Keith Suter

ging is the new frontier. The components are: increased life expectancy, increased health expectancy and the growth in human enhancement technology. The bottom line is that society is heading for some major challenges which few policymakers are brave enough to address because they are far too focussed on short-term issues. This article will examine the “new frontier” and then examine three security implications: the cost of paying for older people, the tensions arising from pension/ superannuation adequacy, and labour shortages. This article is encouragement to think about the unthinkable.

The Three Components of the New Frontier First: there has been an increase in life expectancy. We have gained as much life expectancy in the last century as in the previous 5,000 years; this an increase of about 25 years. About 5,100 years ago, people lived on average for 25 years. In 1900 the figure had crept up to 50. Therefore giving people in western countries an old age pension was not a big burden on government because most people

never lived long enough to collect it. Now life expectancy is around at least 75 years and there are concerns about the sustainability of pension schemes. This change can be seen in the various phases of aging. Traditionally a person had three stages: young, middle aged and then getting to ready to die. Now there are four stages: (i) childhood (ii) maturity (iii) well aged (the new “third age” with perhaps one third of a life spent in retirement) and (iv) the compression of morbidity (whereby a person’s body declines quickly). Never before has any society had so many older people; there are no precedents to guide us. The first Australian to live to 120 is already alive and she is probably currently in her 60s (unfortunately we do not know who she is and so we cannot warn her). Second: there is increased health expectancy. Growing older does not necessarily mean feeling older (“60 is the new 50”). Average incapacity-free life expectancy is rising faster than average life expectancy overall, and so people are not only living longer but they are also living more healthily. Many people are taking better care of their health and so reducing lifestyle risks (such as smoking). There is also

DOUBLE FEATURE EDITION: The Australian Security Magazine is the country’s leading government and corporate security magazine. It is published bi-monthly and is distributed free of charge to many of the biggest decision makers in the security industry and leading industry events. It is a highly respected and sought after publication, incorporating investigative journalism, provoking editorial and up-to-date news, trends and events for all security professionals.