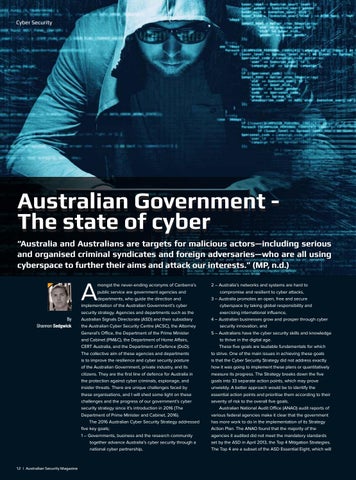 Australian Government The state of cyber “Australia and Australians are targets for malicious actors—including serious and organised criminal syndicates and foreign adversaries—who are all using cyberspace to further their aims and attack our interests.” (MP, n.d.)

A By Shannon Sedgwick

mongst the never-ending acronyms of Canberra’s public service are government agencies and departments, who guide the direction and implementation of the Australian Government’s cyber security strategy. Agencies and departments such as the Australian Signals Directorate (ASD) and their subsidiary the Australian Cyber Security Centre (ACSC), the Attorney General’s Office, the Department of the Prime Minister and Cabinet (PM&amp;C), the Department of Home Affairs, CERT Australia, and the Department of Defence (DoD). The collective aim of these agencies and departments is to improve the resilience and cyber security posture of the Australian Government, private industry, and its citizens. They are the first line of defence for Australia in the protection against cyber criminals, espionage, and insider threats. There are unique challenges faced by these organisations, and I will shed some light on these challenges and the progress of our government’s cyber security strategy since it’s introduction in 2016 (The Department of Prime Minister and Cabinet, 2016). The 2016 Australian Cyber Security Strategy addressed five key goals; 1 – Governments, business and the research community together advance Australia’s cyber security through a national cyber partnership,

2 – Australia’s networks and systems are hard to compromise and resilient to cyber attacks, 3 – Australia promotes an open, free and secure cyberspace by taking global responsibility and exercising international influence, 4 – Australian businesses grow and prosper through cyber security innovation, and 5 – Australians have the cyber security skills and knowledge to thrive in the digital age. These five goals are laudable fundamentals for which to strive. One of the main issues in achieving these goals is that the Cyber Security Strategy did not address exactly how it was going to implement these plans or quantitatively measure its progress. The Strategy breaks down the five goals into 33 separate action points, which may prove unwieldy. A better approach would be to identify the essential action points and prioritise them according to their severity of risk to the overall five goals. Australian National Audit Office (ANAO) audit reports of various federal agencies make it clear that the government has more work to do in the implementation of its Strategy Action Plan. The ANAO found that the majority of the agencies it audited did not meet the mandatory standards set by the ASD in April 2013, the Top 4 Mitigation Strategies. The Top 4 are a subset of the ASD Essential Eight, which will

DOUBLE FEATURE EDITION: The Australian Security Magazine is the country’s leading government and corporate security magazine. It is published bi-monthly and is distributed free of charge to many of the biggest decision makers in the security industry and leading industry events. It is a highly respected and sought after publication, incorporating investigative journalism, provoking editorial and up-to-date news, trends and events for all security professionals.